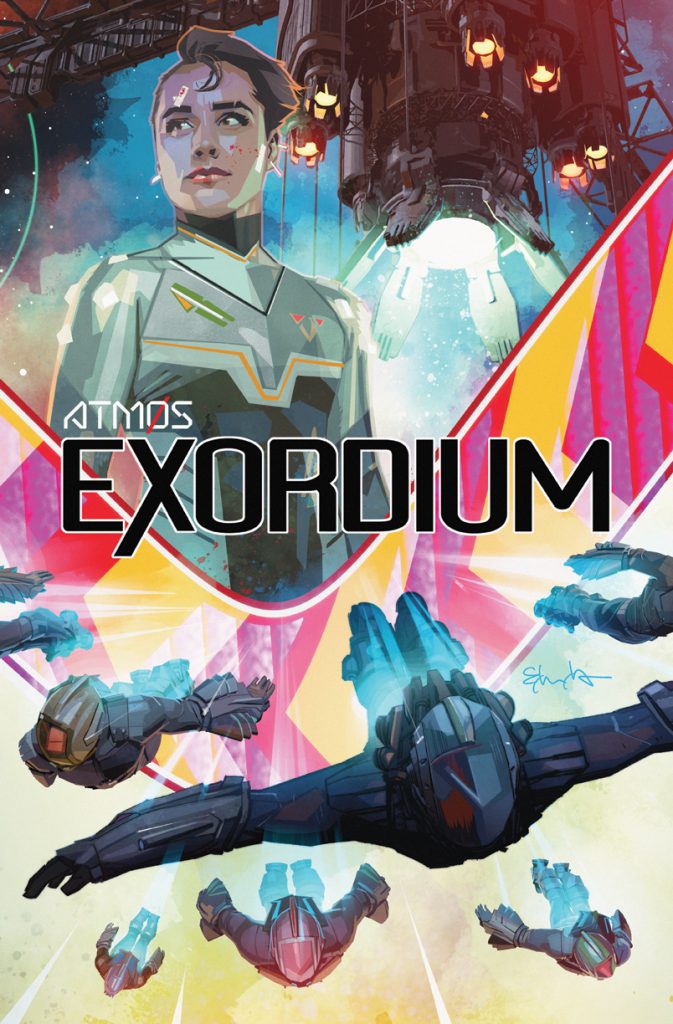 Stumbling into the ranks of Atmos’ legendary ExoGP racing league, Addy finds herself pitted against the most tenacious and talented pilots in the galaxy. Racing head-to-head on deadly tracks that defy imagination, it will take more than Addy’s lethal training and indoctrinated aggression to get her across the finish line first…if she survives at all.

Exordium is led by Creative Director Tommy Lee Edwards, one of the most respected and versatile creators working today. He has illustrated comics like Mother Panic, Turf, Grendel Kentucky, Jupiter’s Legacy, and Marvel 1985. He has collaborated with the Hughes Brothers as the concept artist on their Denzel Washington epic The Book of Eli, and has also contributed to the production and promotion of movies like Harry Potter, Star Wars, and Batman Begins.

Exordium is co-created by Dylan Bushnell, serial creative entrepreneur and son of Atari founder Nolan Bushnell. Dylan rose to prominence as a co-founder of Polycade, and has worked with X2 Games, Virsix Games, and Two Bit Circus to bring immersive storytelling to life.

Other prominent creators working on the project include artist Andrea Cucchi (The Other History of the DC Universe), lead-writer Rob McEveety (The Devil Has a Name), and colorist Giovanna Niro (Jupiter’s Legacy), with lettering by John Workman (Thor).

“This project was too exciting for me to pass up. In my 25+ year career, Atmos is the very first project I’ve ever worked on where I’m all in,” said Tommy Lee Edwards. “Building an entirely new world across new technology and new styles of collaboration required a new approach to creative worldbuilding. What you’ll see in the comic comes from that process, with all our artists working together to bring the vision of Atmos to life, not just here but in a way that lays the foundation for a broader creative universe.”

“Exordium is an epic racing story and the first canon narrative in the Atmos Universe,” said Dylan Bushnell. “This series is called Exordium because it’s the world’s introduction to the hostile planet of Atmos. Set 500 years in the future and 192 light years away, the series follows a season of ExoGP — the competitive flight-based racing league on Atmos — through the experiences of a few of its competitors.”

“Exordium is the bedrock of the narrative journey for Atmos, acting as the nexus for Atmos Labs’ current and future products. Tommy and Dylan are the perfect pairing to lead this project, and we are beyond excited to share their thrilling vision with the world,” said Atmos Labs CEO Kevin Beauregard.

The Digital Collectible edition of Chapter One will be available on the Atmos website starting on October 7th, and features three covers:

The standard digital edition is available for pre-order now and will be released on October 17th on digital reader platforms, including Amazon, with a planned graphic novel print release by the end of the year.