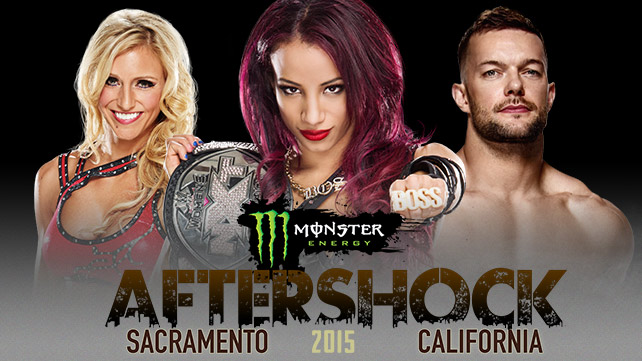 The monsters of rock will meet the monsters of the ring, as the Superstars and Divas of WWE NXT are ready to bring their hard-hitting, in-your-face brand of sports-entertainment to the fourth annual Monster Energy AFTERSHOCK Festival in Sacramento, Calif., on October 24 and 25, 2015!

NXT has grown into one of the hottest brands in sports-entertainment over the past two years, thanks to the high octane action it presents every Wednesday on the award-winning WWE Network. The Superstars and Divas of Tomorrow have also taken their show on the road, packing 5,000 fans into San Jose State University’s Event Center for an unforgettable, sold-out Live Event during WrestleMania 31 Week, as well as buzzworthy shows in Philadelphia and Albany, N.Y.

It will be no different when WWE NXT takes over Monster Energy AFTERSHOCK 2015, October 24 and 25 at Gibson Ranch, just outside of Sacramento, Calif. Ticket pre-sales begin Wednesday, May 27 at 1 p.m. ET/10 a.m. PT. Public on-sale starts Friday, May 29 at 1 p.m. ET/10 a.m. PT. All tickets will be available at Aftershockconcert.com/tickets. Don’t miss your chance to see NXT live, up close and personal!