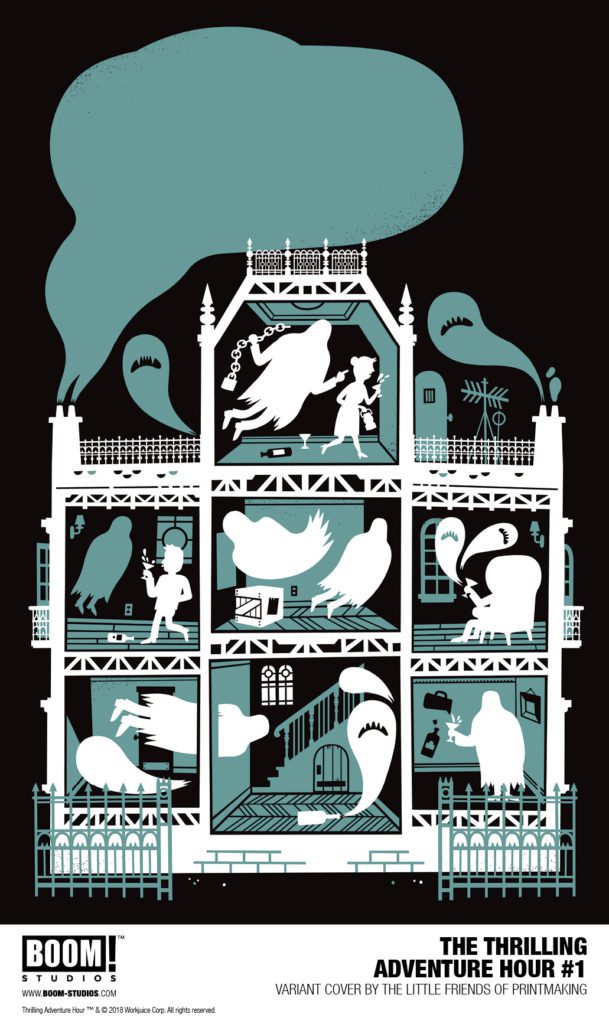 Your First Look at THE THRILLING ADVENTURE HOUR #1 from BOOM! Studios

BOOM! Studios is proud to present your first look at THE THRILLING ADVENTURE HOUR #1, the first issue of an all new series by creators Ben Acker and Ben Blacker, along with rising star artist M.J. Erickson, to be released on July 18th. Based on the wildly popular Hollywood stage show and podcast, Frank and Sadie Doyle are the toast of the upper crust – headliners on the society pages…and they see ghosts. When one night of having a drink (or ten) with friends goes horribly, and perhaps predictably, wrong at a haunted house, the Doyles find themselves in a situation beyond belief.

Created in 2005 by Ben Acker and Ben Blacker, The Thrilling Adventure Hour is both a popular Hollywood stage show and podcast that pays homage to the timeless Hollywood radio serials. These original and exciting stories crossing a myriad of genres have been performed by actors and comedians such as Paul F. Tompkins, Paget Brewster, Busy Philipps, Nathan Fillion, Linda Cardellini, Patton Oswalt, Neil Patrick Harris, and more.

THE THRILLING ADVENTURE HOUR #1 features a main cover by Jonathan Case (Green River Killer), along with variant covers by Natacha Bustos (Moon Girl and Devil Dinosaur) and the award-winning The Little Friends of Printmaking.

“Acker and Blacker captured lightning in a bottle with The Thrilling Adventure Hour and we’re so excited to bring that creative spark to comics,” said Cameron Chittock, Editor, BOOM! Studios. “Thanks to M.J. Erickson’s incredible line work, Frank and Sadie Doyle are back to their old tricks and I can’t wait for fans to see the twists and turns this haunted house has in store for them.”

Also in stores on July 11th,, THE THRILLING ADVENTURE HOUR: A SPIRITED ROMANCE DISCOVER NOW EDITION is a comic shop-exclusive collection of The Thrilling Adventure Hour Presents: Beyond Belief limited series (previously published by Image Comics) from Acker, Blacker, and artist Phil Hester (Green Arrow), which introduces readers to Frank and Sadie Doyle for the first time. This collection carries an MSRP of $14.99 and features a cover by Hester.

In October, a standard edition of THE THRILLING ADVENTURE HOUR: A SPIRITED ROMANCE, featuring a different cover and including additional behind-the-scenes material, will be released to comic shops and bookstores worldwide, with an MSRP of $14.99. While this standard version will remain in print, THE THRILLING ADVENTURE HOUR: A SPIRITED ROMANCE DISCOVER NOW EDITION will be strictly limited to the initial print run and then never reprinted again.

Print copies of THE THRILLING ADVENTURE HOUR #1 and THE THRILLING ADVENTURE HOUR: A SPIRITED ROMANCE DISCOVER NOW EDITION will be available for sale in July 2018 exclusively at local comic book shops (use comicshoplocator.com to find the nearest one). Digital copies can be purchased from content providers, including comiXology, iBooks, Google Play, and the BOOM! Studios app.

For continuing news on THE THRILLING ADVENTURE HOUR and more from BOOM! Studios, stay tuned to www.boom-studios.com and follow @boomstudios on Twitter.