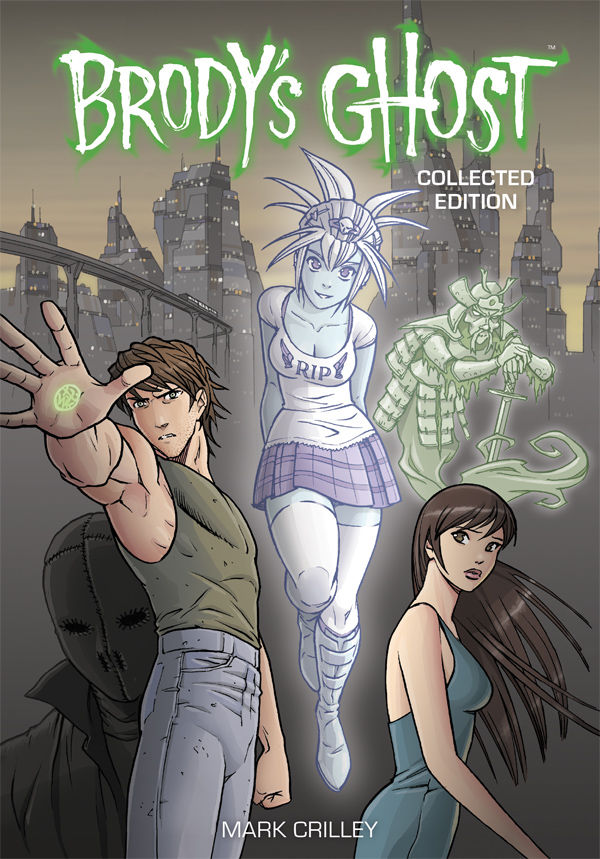 When I first came across Brody’s Ghost by Mark Crilley, I was instantly drawn in by the cover alone, not knowing anything of what I was about to expect. This collection includes all six black and white volumes of the series, as well as the color stories from Dark Horse Presents. After reading this collection, I can tell you exactly what I got:

The story follows Brody, a down on his luck street musician who has absolutely seen better days. The break up with his girlfriend took its toll on the young man, to the point to where he let the rest of his life fall apart. Things hit rock bottom when he comes face to face with a young apparition named Talia. Turns out Brody is a ghostseer- someone who can see, hear and communicate with ghosts. Brody is enlisted to help Talia find the Penny Murderer, a psychopath who has been leaving a trail of bodies littered across the streets- bringing justice to this murder will apparently help Talia cross over to the other side.

Of course, the story is far more complicated than this, but it can all be summed up with this: when you hit rock bottom, you can either look within and find the strength within yourself, or you can simply exist in this life, making no real impact with the life you are given. Brody goes from being a broken man to being stronger than he could have ever imagined. Talia has far more to her story than Brody is led to believe, and reaches a part of her afterlife she didn’t see coming. The mystery of the Penny Murderer propels the story forward all the way until the end, but another growing subplot is between Brody and his ex-girlfriend Nicole. There are also more supernatural elements at work here as well, as Kagemura, a ghost sensei who trains Brody in the ways of the supernatural, is a big part of the story, as he helps mold Brody from a broken man into a hero.

The arc Brody takes is so well done, I was completely blown away by the time I reached the last page. Mark Crilley creates something amazing here, something that fans of the genre need to check out. We get to know Brody and what makes him tick, we see him pushed literally to the edge when it looks like all hope is lost, and in the end, we see a very satisfying conclusion to the story. I became interested in the well-being of these characters, making it through this massive collection in one sitting. I do hope we can revisit this world one day, but if it’s not meant to be, at least we get it all the volumes collected in this very affordable collection. Brody’s Ghost is a must read for fans of the paranormal, and honestly, for fans of great, coming of age hero stories.