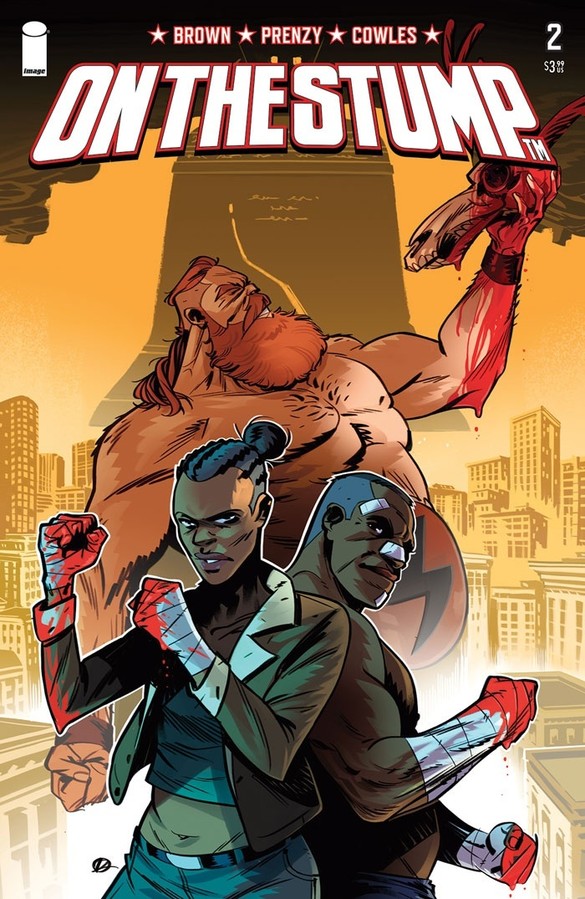 Image Comics and writer Chuck Brown continue their onslaught of mystery, intrigue, mayhem, and politics in the latest issue of On The Stump.

Political issues are settled in the ring in this crazy world. The powers that be have been trying to pass The Slay Act, which would legalize killing in the ring, but there has been a setback. They now want to focus their attention on lifting the ban on mutant upgrades to make for a more entertaining spectacle. The Thunderbearer, one of the biggest proponents of The Slay Act, won’t let that get in the way of whatever his real intentions might be. He is passionate about it and seemingly will stop at nothing to get it passed.

Meanwhile, Jack and Anna continue their quest to find Thunderbearer to stop The Slay Act once and for all. Jack enlists the help of some friends, a secret organization known as The Blacksmiths, a group started by slaves in 1863. And after breaking a major story, reporter Abe has put the lives of everyone around him in danger. Now he must choose between freedom of the press or the safety of people he knows and loves.

On The Stump continues to entertain and deliver the goods in the second issue. It moves fast and is continuously adding new story elements and characters. The great thing is that it never feels overstuffed or complicated; it’s a straightforward story to follow while being incredibly deep. Brown has created a whole new world that also feels oddly relatable. I think it might be the fact that while we don’t want the dystopia he presents, we feel like we are already there just by watching the news every day.

The characters are multi-layered, and some are full of secrets. Thunderbearer hasn’t revealed his true motives behind wanting The Slay Act passed so badly. Anna seems to have skeletons in her closet as well, ones that she isn’t telling Jack. There are also the two badass women who have been taking matters into their own hands who we know nothing about. They have been killing and fighting the good fight since the first issue, but we don’t even know their names. I’m very curious to learn more about them. And I really can not wait to see more about The Blacksmiths, and what they are capable of, that story is going to get really interesting. I love secret society intrigue, and this is right up my alley.

The dialogue between characters feels naturalistic, and the emotions are real. You can feel the characters jump off of the page like they are real people. Some of them are tired, some are angry, and some will stop at nothing to get what they want, and that shines through the wonderful writing. The story itself keeps on revealing new twists and turns. There are layers to everything in the world, and the layers are just beginning to be dug into. I’m excited to see where the story goes.

And the artwork by Prenzy! Every panel is bright and bursting with colorful energy. The world is incredible and beautiful to look at; it’s quite stunning—one of the most well-drawn and colored books I have seen in a long time.

What started as a violent spoof of politics in its first issue, On The Stump quickly blossomed into something more. Brown has created something incredibly unique with this series. In its second issue, it already defies expectations and has become a must-read. I highly recommend checking it out!