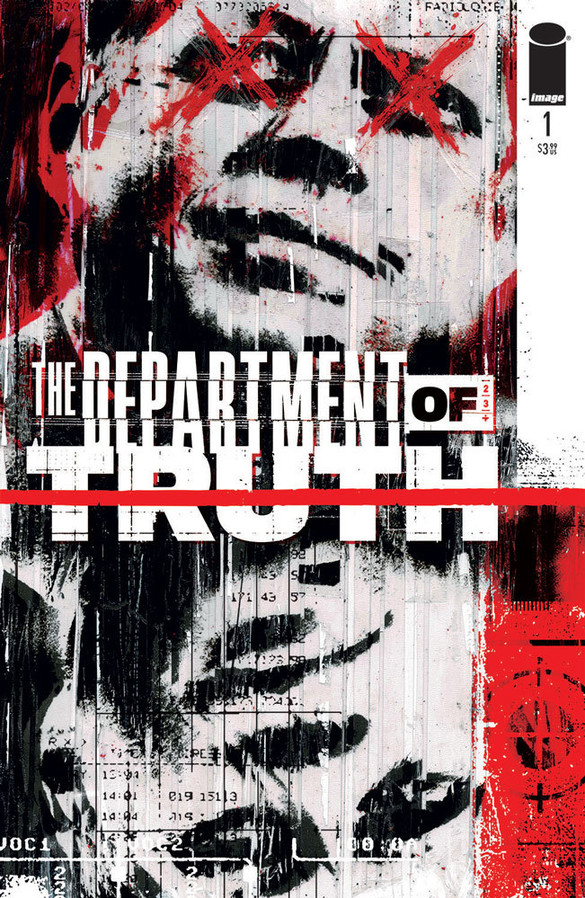 Belief can make or break the world. Belief in the truth. Belief in the unexplained, belief that everything will be ok. With Image Comics The Department of Truth. We dive deep into the world of belief and a conspiracy, deep-rooted in the history we think we know.

From James Tynion IV, Martin Simmonds, Aditya Bidikar, and Dylan Todd, this issue hits the ground running. We see a glimpse from the past of one of the largest conspiracy points in U.S. history- fast forward to now, and we meet FBI agent Cole Turner, who has seen something he shouldn’t. He is ushered away by mysterious government officials as he faces certain death. After investigating the Flat Earth society, Turner sees something that shakes his world to the core and meets a mysterious woman in red with a vibe that sends chills down his spine. Thankfully he is saved by another mysterious woman who brings him in.

Eventually, Turner learns what the Department of Truth is, and who is leading it, another massive surprise. How will Turner react to this overload of information? What will the Department of Truth do next? Who or what is the lady in red with no eyes? This book takes the Men in Black essence but ramps it up to eleven. The world is full of conspiracies and those that believe in them, and this book takes such an interesting stance on it.

Tynion has crafted a story full of intrigue and danger, with artwork that matches the mood perfectly. I love the guiding principle in this book, that belief by several individuals can change the world. It is scary yet intriguing. Simmonds artwork is scratchy and emotional, so fitting for a book of this nature. I loved the debut issue: The Department of Truth shines the light on the craziness of conspiracies, and by the end, you might believe as well.

Rating: FOUR out of FIVE.