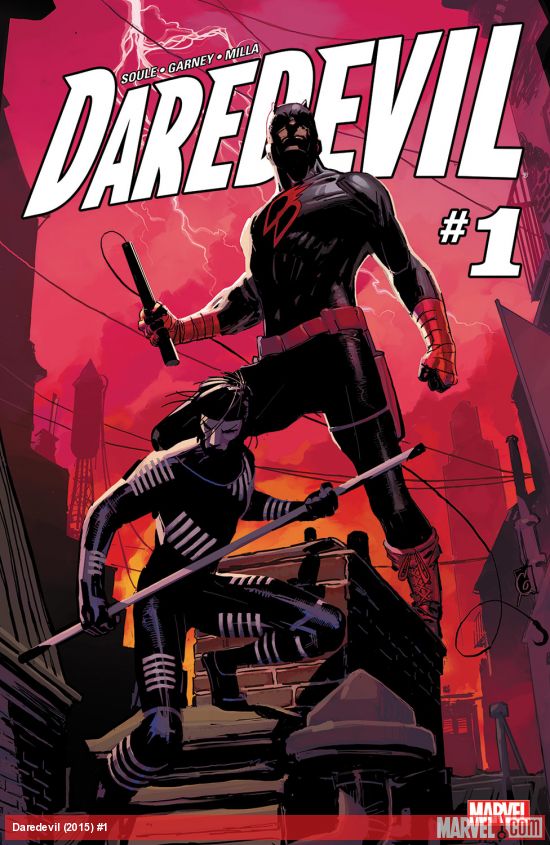 (Victor Valley)– This year, the world was reintroduced to the devil of Hell’s Kitchen as Netflix brought the world the amazing Daredevil series. Hot on the heels of the outstanding television outing, Marvel has taken one of its highest rated books with Daredevil and relaunched it with a new creative team. Does the horned hero shine once again in the light? Or is he left in the dark?

Taking the helm this time is writer Charles Soule, who created the amazing 27 series for Image Comics and has been on fire lately with his string of Marvel titles. It really makes sense to have Soule write the new Daredevil series- who better to write the hero by night/ attorney by day than a comic book writer who is also an attorney? The book starts with Daredevil, sporting snazzy new duds that pay homage to the crimson past costume, stopping a brutal attempted murder by the henchmen of a crime boss known as Tenfinger. But Daredevil isn’t alone, as he is assisted by the hero, Blindspot. During the day, Daredevil’s secret identity, Matt Murdock, is now working with the district attorney’s office, a change from Murdock’s help the little guy mentality. It’s a new path for old horn head, one that I can’t wait to take.

Art is provided by a legend in modern comics, Ron Garney, known for his multitude of Marvel books throughout the years. The artwork here nothing short of spectacular: Garney’s clear line work partnered with an amazing color palette makes this book look like nothing else on the shelves right now. Daredevil, his unique skill set and powers, the young Blindspot and the creepy Tenfinger all look superb.

I was extremely excited for this issue: the previous Daredevil run by Mark Waid was amazing, and I knew with Soule and Garney being the storytellers this time around, we would be in for something special. I couldn’t have foreseen the sheer brilliance I have seen with this issue. Fans of the Netflix series, this is your perfect jumping on point, as this looks and feels like a Daredevil book should. Easily one of the best of the Marvel relaunches, Daredevil #1 is a must read.

Rating: 5 out of 5. Even a blind Matt Murdock can see this issue’s greatness.