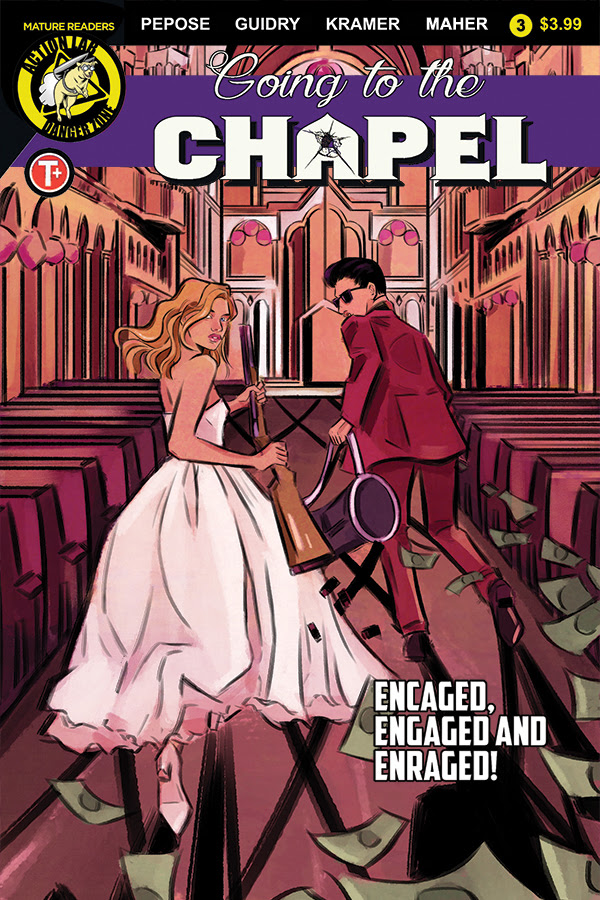 Things are about to explode as the story continues in the third issue of Action Lab Danger Zones Going To The Chapel.

Things haven’t been going so well at Emily and Jesse’s wedding. The wedding party has been held up by the Bad Elvis Gang, and to add a new wrinkle, there is a bomb waiting to go off. Not only a literal bomb but also an emotional one as more details of Emily’s past start to emerge. She has been hesitant about getting married since the beginning, and she is about to reach her breaking point.

Also helping her reach that point is the wedding party. They are getting restless and trying desperately to find a way to take down the bad guys and get the hell out of there. But thanks to a gun-toting granny, they soon find a way to fight back.

This latest issue offers an unpredictable and emotional roller coaster. One of the many great things about the series so far is how its been slowly revealing the relationship between Tom (the head of the Bad Elvis Gang) and Emily. We finally have a better picture of what happened between them, and it gives Emily’s dilemma more weight. She is torn between her past and her future, but she can only have one of them. With Jesse, it’s security and a decent life, and with Tom, it could mean a lifetime on the run. We never get an answer to this question, but by her actions, it’s implied she has chosen the latter.

Going To The Chapel is part romantic comedy and part heist thriller, and it never feels like one or the other. The way writer David Pepose combines these genres is incredible. His characters are smart, funny, and (deliberately or not) very relatable. The characters that make up the wedding party are rambunctious and a bit unhinged, but that’s family for you. And the way he unravels a mystery is second to none. He started planting the seeds of an interesting, mysterious back story in the first issue that is all starting to come together now

The art and colors by Gavin Guidry and Liz Kramer continue to amaze in this series. The third issue is just as incredibly well done as everything that has come before. It’s the combination of the art style and story that make this story work as well as it does. This issue is no different.

The sign of a great thriller is that it keeps you guessing, keeps you at the edge of your seat, and keeps you wanting more. David, Gavin, and Liz have accomplished all of these things. Trust me when I say that this issue is probably the best in the series so far, as things are starting to come to a head. Don’t sit this one out, definitely pick this issue up!