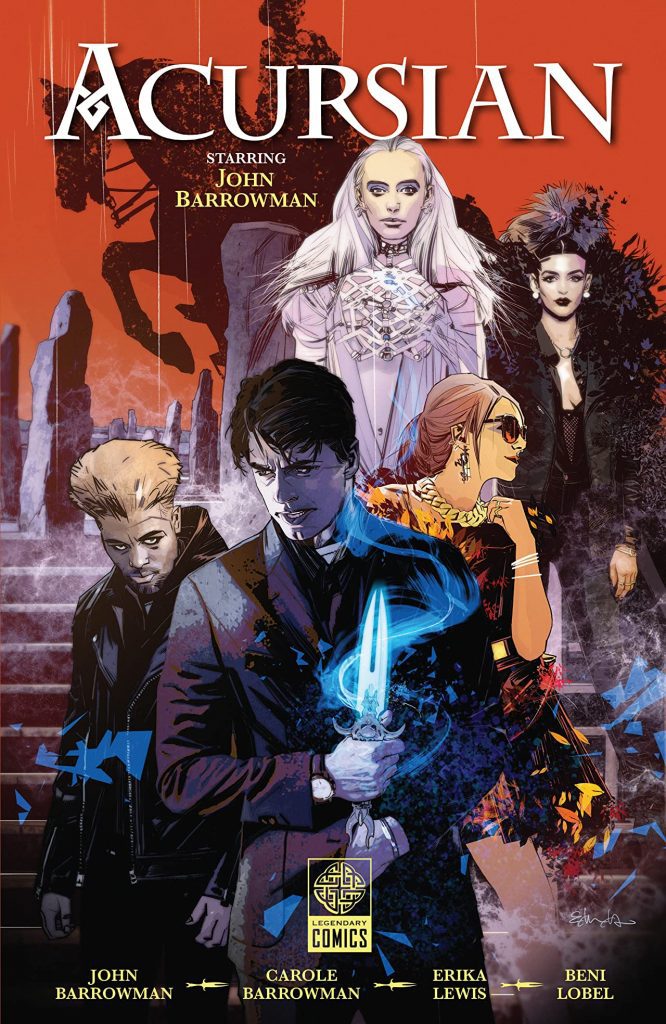 From Legendary Comics and starring John Barrowman, Acursian is a story that spans the ages. It is steeped in Celtic mythology and has an exciting sci-fi angle that Barrowman fans will definitely enjoy.

Beginning in modern times, the story revolves around Charlie Stewart, an extremely unlikable lawyer. On his 40th birthday, he is plagued by a series of very unfortunate events. While trying to survive the day, he discovers that this is due to a curse passed down through generations of his bloodline. Hundreds of years ago, his ancestor Prince Charles Edward Stewart made a deal with Bregon, the god of war.

Things quickly go awry when Bregon steals three talismans from the goddesses of fate and time, who also happened to be his sisters. Without being able to control destiny, the talismans must be returned to the goddesses. Until that happens, Charles Edward Stewart’s descendants are destined to lose everything on their 40th birthday. This leads Charles on a time and reality-bending journey that will shed light on his heritage and help him appreciate the life that he has.

Written by John Barrowman, his sister Carole Barrowman and Erika Lewis, Acursian is an entertaining read. You really do get to know these characters with all of them given time to breathe and develop. It moves along at a steady pace, and there is plenty of action, but the main problem is the over-bloated story. A lot is going on in different time periods, with a particular subplot involving witches being almost entirely unnecessary. It never feels confusing, but it often feels like an overwhelming amount of narrative to take in.

The artwork by Beni Lobdel and Rubine is bright and colorful, and it brings this world to life. Each era has its own feeling, and it helps ground us in that time. Using John Barrowman as the main character is an inspired choice, and they capture him perfectly on the page. With that being said, sometimes the characters lack expression, and some of the more impactful moments lose their impact because of it.

The Barrowman family and crew have proven that they can tell an amazing and magical story. A few minor complaints aside, Acursian is a fun and exciting journey. If you are into Celtic history and lore and the work of John Barrowman, you should check it out!