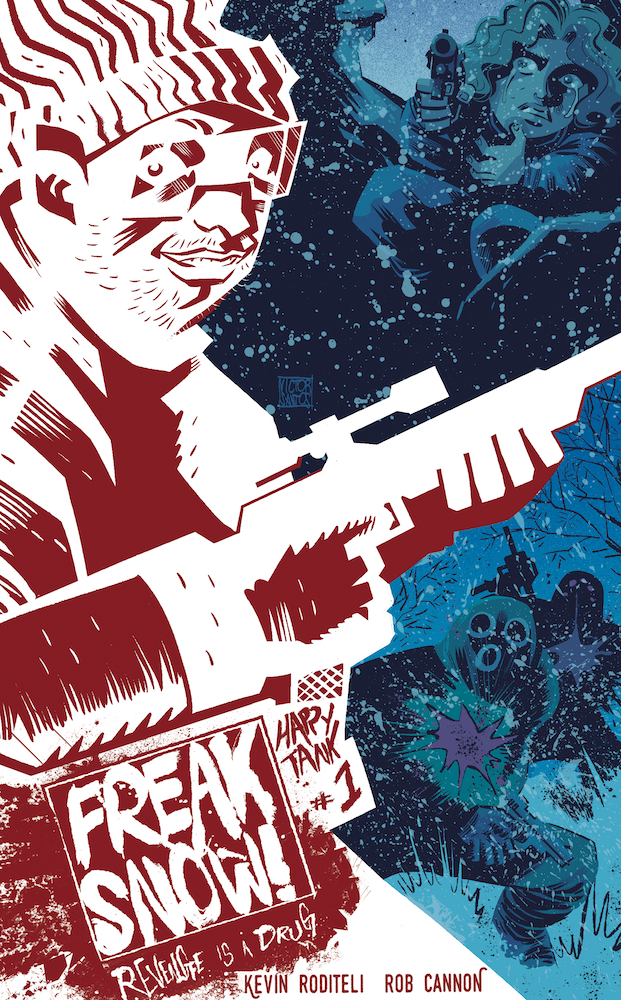 Sometimes a comic book just catches you entirely off guard. This is the case with Freak Snow #1. The book comes from Behemoth and their brand new imprint, Happy Tank.

From Kevin Roditeli, Rob Cannon, and a cover by Victor Santos, Freak Snow takes us into a frozen wasteland filled with violence, murderers, and insanity. Right from the get-go, we are launched into a shootout on the ice, with a young girl in the middle. Things go from bad to crazy when our protagonist Berny recognizes the little girl. Or does he?

Berny isn’t well. Not one bit. He lost his wife and child, deaths that are shrouded in mystery. Mystery mainly because Berny’s reality is very skewed. He has two best friends: an old robot toy and a beer can, and together they help defend females in peril. But as I said, Berny is not well: he makes a cocktail with the blood of a strange creature that causes hallucinations and more, making him two steps out of our reality and three steps out the door. He sets out to find the hole of truth, so he can find out what happened to his family, but this is a man seeking a hole of truth- danger and mayhem await.

Freak Snow reads like a frozen mind trip through hell. As this embodies the book’s theme, the creative team nailed it. Roditeli and Cannon craft a frantic tale of violence and sanity loss, mixed in with some humor for good measure. The book has a look all its own, and it’s a look that fits this book exceptionally well. It reminds me of Ashley Woods’s unique designs, and that is always a great thing. The word bubbles and text are incredibly unique and pull you into this world from every angle.

This issue is a mature reader’s romp to nowhere. I got a very Borderlands-style vibe, and being a big fan of that franchise; it’s absolutely a compliment. Freak Snow wages a war of stylish violence and the insight of a madman, and the execution is fantastic. Make sure to check out this book when it hits shelves in May.

Need the order codes for PREVIEWS? Here you go!