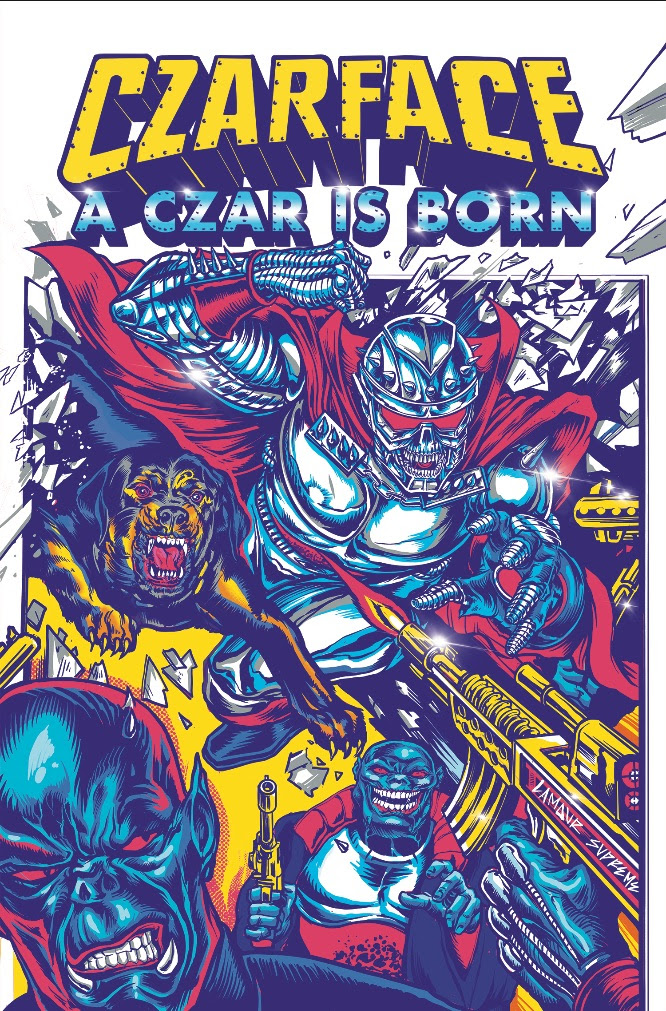 Z2 Comics continues to roll out news marrying celebrated acts from all genres of music with the finest talent in comics for the most immersive reading experiences offered anywhere. Today furthers this promise with perhaps one of the most anticipated releases from hip hop supergroup, CZARFACE, co-founded by duo 7L and Esoteric, along with Inspectah Deck of the Wu-Tang Clan.

“The chance to bring Czarface to life on this scale is something I’m really amped up about” says CZARFACE co-founder and writer, Seamus “Esoteric” Ryan. “What lies ahead, especially in collaboration with the powers of the great Ariel Olivetti, is filled with heavy heroics, vile villainy, and cosmic chaos!”

Comics have been in the DNA of CZARFACE since the beginning, with imagery recalling the Silver Age of Marvel Comics, and previously released by the group’s own label of the same name.

Hero to some, villain to others, Czarface’s true origins have remained a mystery…UNTIL NOW! Who are the Zarta Ku? And why has their desperate mission brought them to Planet Earth? Meanwhile, Zach and his dog were just a washed up wrestling tag team making ends meet on the comicon circuit when they crossed paths with a woman who will change both their lives forever. Written by Czarface’s own Esoteric (Merry X-Men Holiday Special) with art by veteran illustrator Ariel Olivetti (Cable; Punisher War Journal), this landmark original graphic novel is a must-have for Wednesday warriors, wrestling marks, and hip-hop heads–or fans of all three combined!

Z2’s Chris Robinson says “Meeting Eso in the Marvel offices a few years ago, I could have never guessed we’d be making comics together eventually–let alone a full-length OGN with one of my favorite artists of all time Ariel Olivetti! I’m so proud to be part of this creative team and can’t wait for everyone reading this to have a copy in their hands!”

CZARFACE: A Czar is Born is the official origin story written by Esoteric himself, with art by comics veteran Ariel Olivetti, and featuring covers by longtime artist Lamour Supreme, and available in four special editions available to preorder now through the Z2 website! Fans have the option of purchasing in one of four editions, including deluxe and super deluxe editions, released with prints, exclusive viny, and more! Look for this nod to nostalgia at your favorite comic shop or bookstore in August 2021! Preorder your edition today!