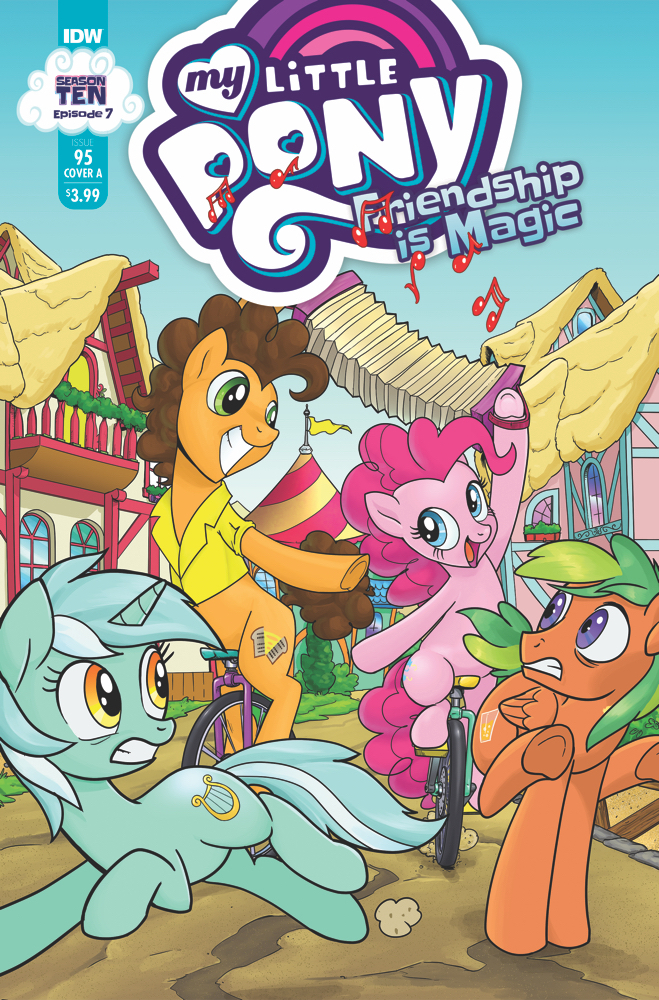 IDW soon releases its 95th Issue of My Little Pony: Friendship is Magic. My Little Pony has been a favorite of mine, so I was excited to read it.

In this episode, the Muffletta Moss has taken over Ponyville. This magic moss absorbs sound. Like a plant, when it gets what it needs, it multiplies. Nobody really knows how to stop it. They come up with lots of ideas, but they still can’t seem to figure it out. The Harmony Five go around town to help in any way they can. In a bout of sadness for Cheese Sandwich feels bad; Pinkie Pie attempts to help him feel better. While doing so, they realize the key to controlling the Muffletta Moss’s effects on the town.

The creative team includes Thom Zahler (Writer), Toni Kuusisto (Artist), Heather Breckel (Colorist), Neil Uyetake (Letterer). Right off the bat, the writing was great because of the symbolism. Pinkie’s loss of words was something that stuck out to me. In the beginning, the artwork needed to keep the story going; when no ‘sound’ could be heard, I could see what they were thinking and saying in just their expression alone. The fanciful colors added to the portal that transported the reader into Ponyville. It built on the whimsy of the story. The cool lettering added quality: the reader could almost hear the laughter, emotions, and even affixed movement to objects. It made the reader feel like you were actually hearing all the goings-on. On a side note, I also enjoyed viewing the variant covers, offering a cool contrast of differing styles.

Be on the lookout for this fantastic issue at your Local Comic Book Store!