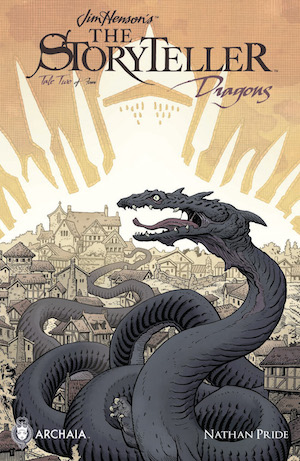 (Victor Valley)— Jim Henson’s The Storyteller: Dragons continues on with the second issue, featuring another stand alone take of dragon folklore, told by the wise Storyteller with his trusty canine friend. This time, we get a tale of decisions and consequences set in the medieval times.

Written and drawn by Nathan Pride (Mage The Awakening), this story is about a young, arrogant prince who catches a strange worm in a river. Disgusted by it, he discards it into a well and goes off to war in an effort to come back a better person, a person worthy enough to be his father’s successor. But while he is gone, that worm grows into a long, deadly serpent that wrecks havoc on the kingdom. When the prince returns a hardened, changed knight years later, he has to come to terms with what has happened in his absence, and what can he do to save his land.

Pride creates a story that follows what we saw with previous Storyteller tales- it not only entertains, it has a meaning, a moral to it all. Pride’s story and artwork are well deserved and fitting for this series, bringing a new type of dragon to the mix, one different than what we saw in last issues story. I love the whole idea of The Storyteller; the previous series, Witches, is one of my favorite series of 2015, and with the way Dragons is going, I have no doubt this series will rank right up there, if not higher. If you aren’t reading this series, you are seriously missing out on an extremely fun series.