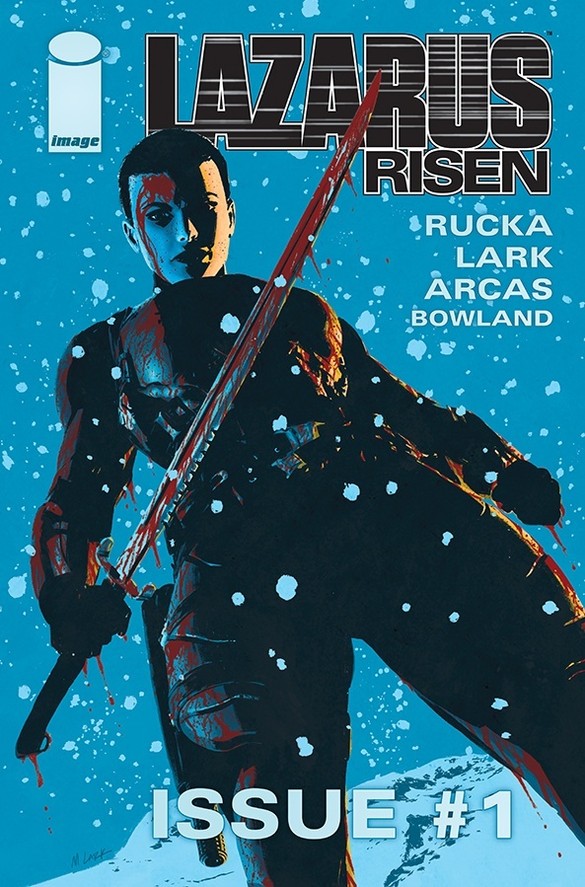 The universe created by Greg Rucka and Michael Lark continues to grow, and boy oh boy I couldn’t be more thankful. “Lazarus Risen” picks up with the Carlyle family backed into a corner, with all other families surrounding them. The beginning of the comic has a short character list and a mini-prologue to help along anyone who is new to the series. But even if you are familiar with the series, I loved this little feature because it was nice to be able to reference it as I was going through this new edition.

In this issue, Forever and her Dagger Alpha special force team raid the house of a lesser family in this feudal system. Rudy Aklaq has betrayed the Carlyle family as well as his sister. With Forever’s help Johanna, the head of the Carlyle Family, makes sure he pays. After a gruesome showing of her power, Johanna then makes a deal with the Vassalovka family. As Johanna celebrates a plan followed through flawlessly, her sister Forever is a little less enthusiastic. Forever wishes to see the most recent Lazarus Program product, Eight. But this task isn’t so cut and dried as the others for the special force commander, Eight is only a child and is under constant guard. In the final scenes, Forever meets a member of the D’Souza family on an abandoned launch platform in the middle of the Atlantic to make a deal (wow not sketchy at all). Needless to say, the final frame shows Forever being ambushed from behind with a sword to her throat.

I’m happy with the amount of depth being put into this universe. Aside from the prologue and character list, in the beginning, they continue to add little literary pieces after the comic to just unify and expand on Lazarus. There is a lovely short story by Lilah Sturges, “Your Last Meal On Earth,” about Johanna Carlyle dining at the restaurant named La Voliere. And they later say they’d like to continue adding these short stories to the end of each edition. They include letters with Q&A as well as some scientific facts, but one of the coolest features to me was the section for “World of Lazarus: Tools of War.” Green Ronin Publishing, the creator of the Modern Age RPG, penned this section to support the RPG now and in the future by adding NPC’s, equipment, and rule modifications. I cannot wait for Part 2 in July and I am looking forward to getting the next collective works they put out for this series. Grab your copy now and enjoy everything this quarterly release has to offer!