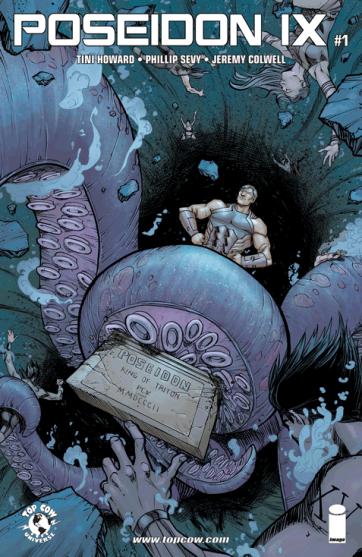 (Victor Valley)– The newest chapter in the story of the IXth Generation comes in the form of the one-shot featuring the “god” of the sea. In a nutshell, the IXth Generation were created in the 20th century to face an extinction level event. After the event, the 9 beings were frozen for 700 years. Upon awakening, they rose up and became the rulers of all of the domains (city-states) of the world.

This story focuses Poseidon and his kingdom above the sea. When his dominion is attacked by an enormous unknown monster, he must enlist the aid of his brother Apollo in order to find a way to take down the beast before it destroys his entire city-state.

Poseidon is portrayed as a very vain and charismatic leader. Unlike Apollo, he cares about his people as much as he cares for himself (and he cares for himself a lot). His egotism almost makes the character unlikeable, but the writer is able to sway the opinion of the reader as the story moves on and he becomes the hero of the story (with a dark agenda in mind).

While the story starts slow, the action and the intrigue build up through the middle and the end, making it a very enjoyable read. The unique way that Poseidon and his people take on the monster keeps the story interesting and leaves the reader wanting to know more.

Rating: 4 out of 5. A slow start, but with outstanding art and character development, this stand-alone story is the best IXth Generation tale yet.