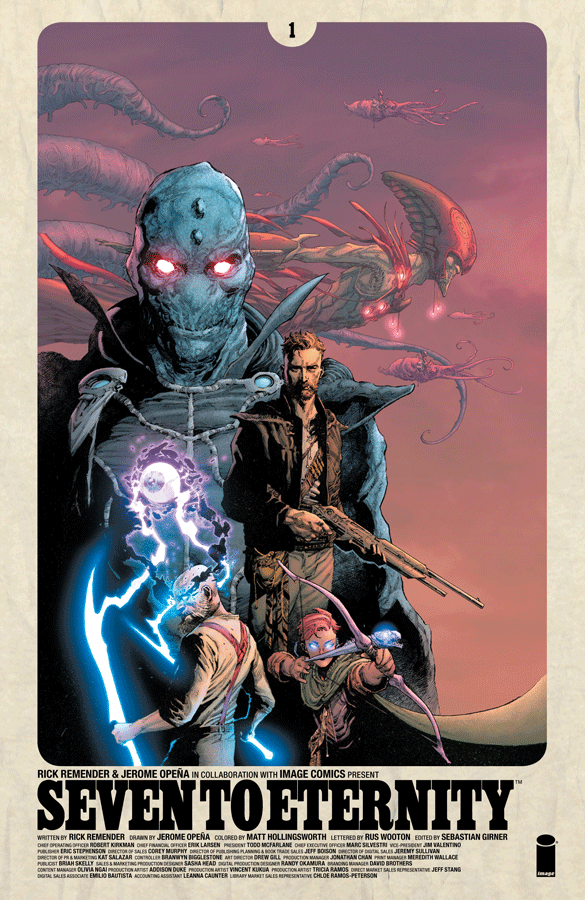 Rick Remender and Jerome Opena are back at it again, and this time, they create a whole universe that feels like a whole lot of genres. Part western, part drama, and all science fiction, Seven to Eternity starts with a bang.

Set in a different world, a different universe and time, we instantly get an old Western feel upon meeting Adam Osidis and his family. Having a wholesome, life on the range feel to them, we see Adam and his daughter hunting a boar like creature straight out another planet. But things change with the sky starts crackling with thunder and lightning, making way for the entrance of followers of the God of Whispers, known to the Osidis family as the Mud King. Seems Adam’s dad, Zebadiah, was cast out of the kingdom for not following the Mud King’s order and turned down any offers to join him, so we see the king’s forces strike, with casualties in tow. This leads to Adam having to travel to the Mud King’s throne and figure out how to stop him, or join him.

Remender is hands down one of my favorite writers. I have followed his work for years now, loving his work at Marvel, but loving his Image Comic work like Sea of Red even more. Remender gives us a story filled with so much craziness, yet grounded by the characters we see. When we see Adam’s family, we see how humble this family lives, yet we see the rage in Zeb when his family is threatened, bringing the sci-fi elements to the forefront. We also get to see what’s going on in Adam’s head, as honor and morality is something that the young man will have to face as his path leads him right into the face of death.

Jerome Opena’s artwork amazes once again with this book. His detail, his crazy designs of this alien world, it is exactly what I want to see out of science fiction. His mastery of the art form and his ability to convey such emotion though his linework alone makes this book that much better. The whole book is done on such a grand scale, all the way to the massive ending, it feels like a major production instead of a single issue.

Seven to Eternity is such a huge hit for Image Comics, it’s not even funny. Remender and Opena create something extremely memorable here, and it’s only the first issue. If you are looking for a comic that embodies science fiction and all its possibilities, then give Seven to Eternity a try.