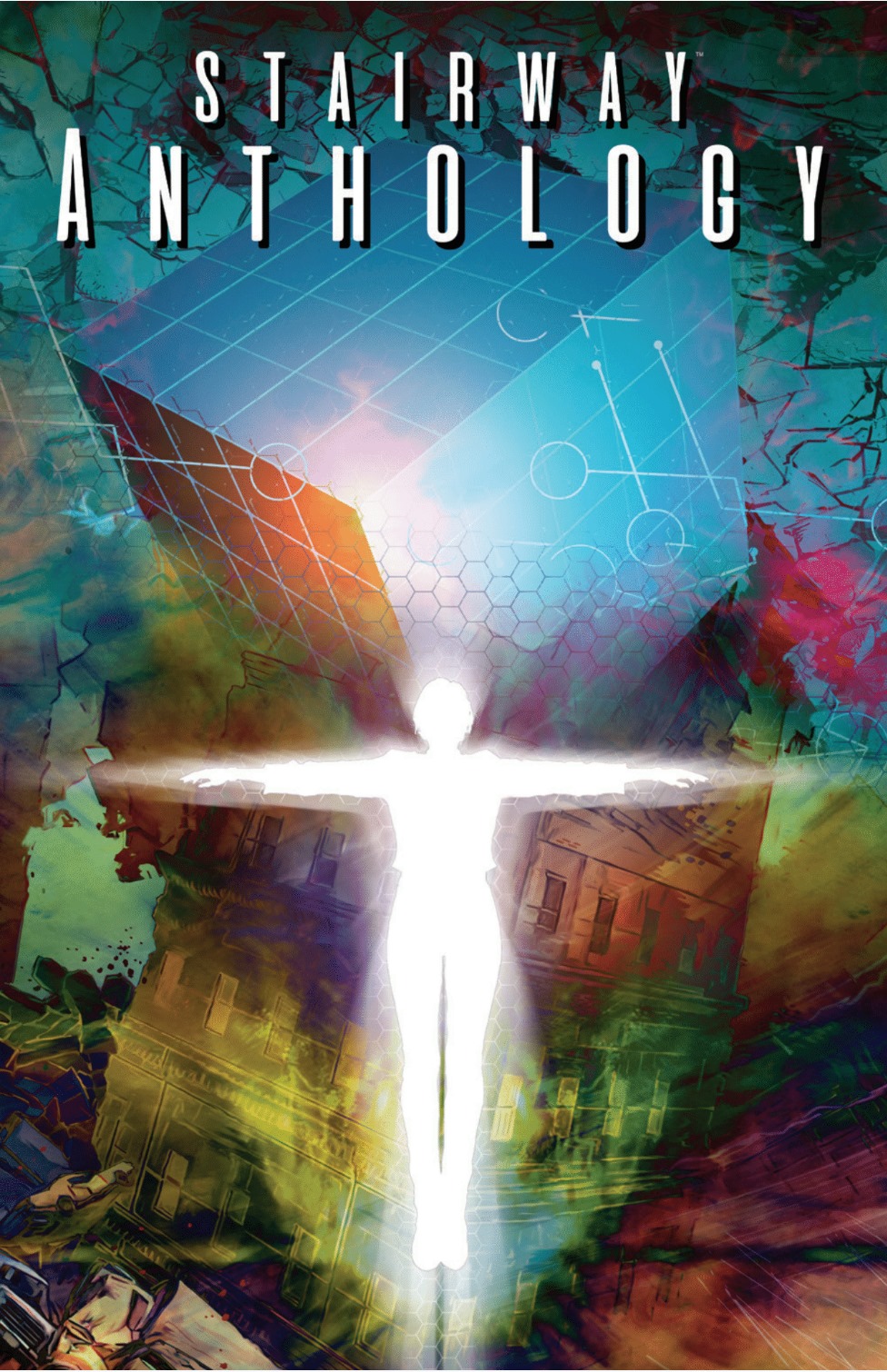 Stairway is a collection of ten comic issues produced by a different creative team for each, respectively, from Image Comics. It is pitched as a window to humanity and its unique tendencies. I was eager to read this anthology as it boasted Michael Crichton (“Jurassic Park,” “Timeline,” “Sphere”) type of science fiction.

To avoid being cumbersome, I will highlight a few issues. The first comic that stuck with me is “A.I.N’T Us.” Writer Christopher Preece, Artist Balazs Valyogos, Colorist Tomi Varga, and Letterer Troy Peteri tell the story of a family moving to a new apartment. However, they find their roommates are less than amicable, as they are Artificial Intelligence. The family (and their beloved pooch) is no match for the drones and hologram’s programmed protocol. It exemplifies today’s society in which we must learn how to traverse new technology and how it influences how we live.

The second is “Antarctica.” Writer Simon Birks, Artist Alberto JA, Colorist Chris Northrop, and Letterer Troy Peteri follow Hannah Curtis on her new assignment in Antarctica. Not much is known about Hannah’s background, only that a mystery surrounds her father’s disappearance. While trying to find her father, Hannah must also fight her new co-worker’s disapproval and as she tries to complete her new task. But Hannah comes face-to-face with a familiar character–but are they friend or foe? I enjoyed this one because it follows the classic setting of a snowbound, isolated location. It also shows Hannah’s tenacity to stand firm in an adverse situation.

Lastly, “Silence” is the final comic I’ll cover. Writer Omar Spahi, Artist Livio Ramondelli, and Letterer Peejay Catacutan chronicle Jenny and Tommy. They live in a time of rebellion, where music is outlawed. Food is scarce, and the underground movement for freedom is hard to find. Jenny is seen wearing her headphones as a form of familiarity. When a drastic turn of events occurs, Jenny finds herself striving to find answers and people with like circumstances. The hiding place showcased in this comic is stunning. The reader is plunged into a world of music notes and trumpet valves. “Silence” offers the age-old question “Is silence a sound”? What is it about music that connects individuals? And what would happen if the freedom of music is eliminated?

While I fancied a good portion of “Stairway,” I was disappointed that there wasn’t a unifying theme. I tried to dig deep to make it work for me. I was hoping that the featured comics would have to do with believable science fiction. Nothing too far fetched, but topics that are so deeply rooted in science that there is a possibility of fiction becoming reality. I also thought that maybe it would play up A.I. versus humankind–think Isaac Asimov’s “I, Robot.” Don’t be mistaken; each issue is completely unique on its own. Respectively, the fascinating stories and incredible artwork is exemplary and deserves merit. I applaud “Stairway” in its effort to bring together ten different teams, to really exhibit the hard work and ingenuity it takes to present a comic.

If you’re looking for a variety of stories and art in one album, check out Stairway: Anthology.

Rating: 3.5 Pastrami Nations out of FIVE