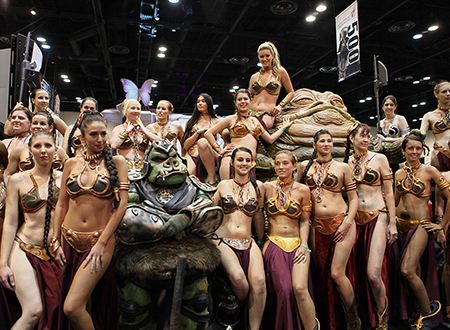 By the Pastrami Nation Staff

Get ready to answer the age old question: Who Shot First? Okay, maybe not… we all know Han did!

Star Wars Celebration kicks off tomorrow and runs through Sunday in Anaheim at the Anaheim Convention Center. The show has something for everyone: from shirts and posters to video games to the grand daddy of them all- Episode VII: The Force Awakens.

Star Wars Celebration kicks off with a simulcast that includes writer/director/producer of The Force Awakens, J.J. Abrams and producer Kathleen Kennedy. The Force Awakens is set to drop this December and will kickstart the franchise for a new generation. This is the big one, the panel everyone will be wanting to check out, as we get to hear from Abrams himself regarding the latest, greatest Star Wars flick.

Being massive gamers, you know we are thrilled about the panel featuring the latest Star Wars video game, Star Wars: Battlefront. Developers DICE will reveal the first official trailer for the game, which will most likely be amazing. All of us at Pastrami Nation are HUGE fans of Battlefront 1 and 2, and when news broke of the latest installment, we couldn’t wait to hear and see more. This is when and where that will happen.

Got kids? There’s tons of fun for kids as well. With panels on making your own droid art, young lightsaber training, and tons about the hit animated show, Star Wars Rebels. The convention floor will host plenty of vendors, many with exclusives to the show. Disney Pin Trader fans will be happy to know that many of the vendors will have exclusive pins available only at the show.