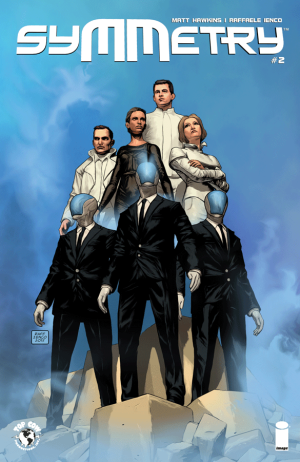 (Victor Valley)– Hot on the heels of the captivating first issue, Symmetry #2 explores the world after a solar flare has severed several people from the hive mind and destroyed their robotic workers.

Having spent their entire life connected to an AI linked to a hive mind and with robots doing all of their work for them, the people in direct line of fire of the solar flare are harshly introduced to the human condition. Thinking for themselves and feeling emotions for the first time, people instantly resort to fighting and fear. Not only have the victims of the solar flare had their minds and feelings turned upside down, but they have also instantly lost their working robots. These robotic workers do all of the manual labor needed in their society and ensure a life of ease for the plugged-in people.

Symmetry takes an interesting look at society and the human condition. The affected people (not everyone in the world was affected by the flare) seem like children learning to deal with their feelings and having been just introduced to someone from another race (the society kept the races segregated in order to enforce their idea of unity). With people quickly devolving to the ugly side of humanity, this book takes a hard look at the idea of humanity and what it means to be human.

Where the first issue did a great job of world building, the second issue continues this by introducing the central computer and the people in charge of their utopian society. Readers are introduced to a group of world leaders who are terrified of the people who have been disconnected because their feelings would pose a big threat to the established order of peace and harmony.

With spot-on dialogue and an amazing art style (the solid dark lines and sharp colors are a personal favorite of mine), Symmetry #2 provides a visually stunning story that is entertaining and makes the reader think. Follow that with a daring cliff-hangar to end the issue and it appears that Image has published another winner.

Rating: 10 out of 10. With a great concept and terrific writing, I can see this series having a long and successful run.