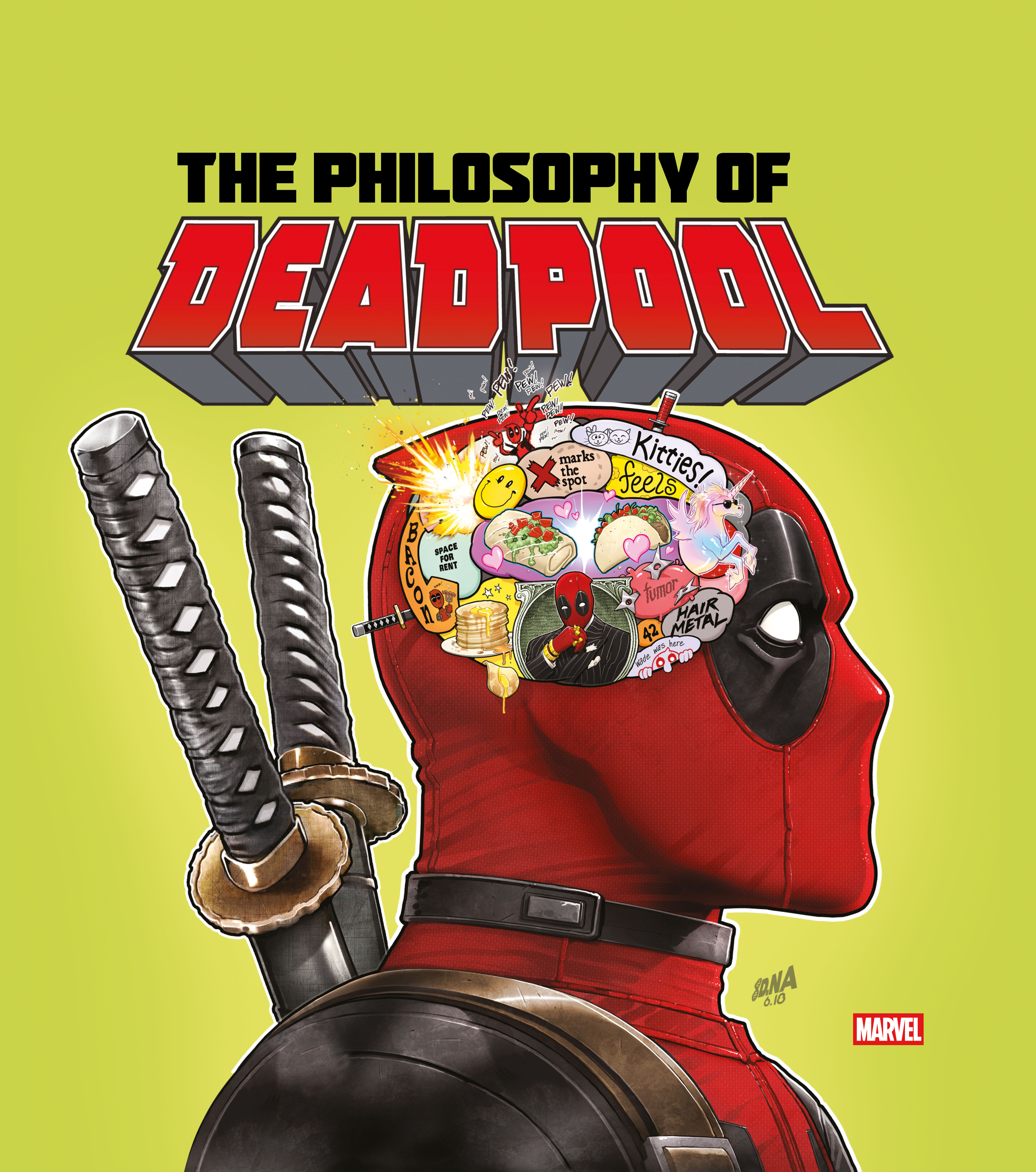 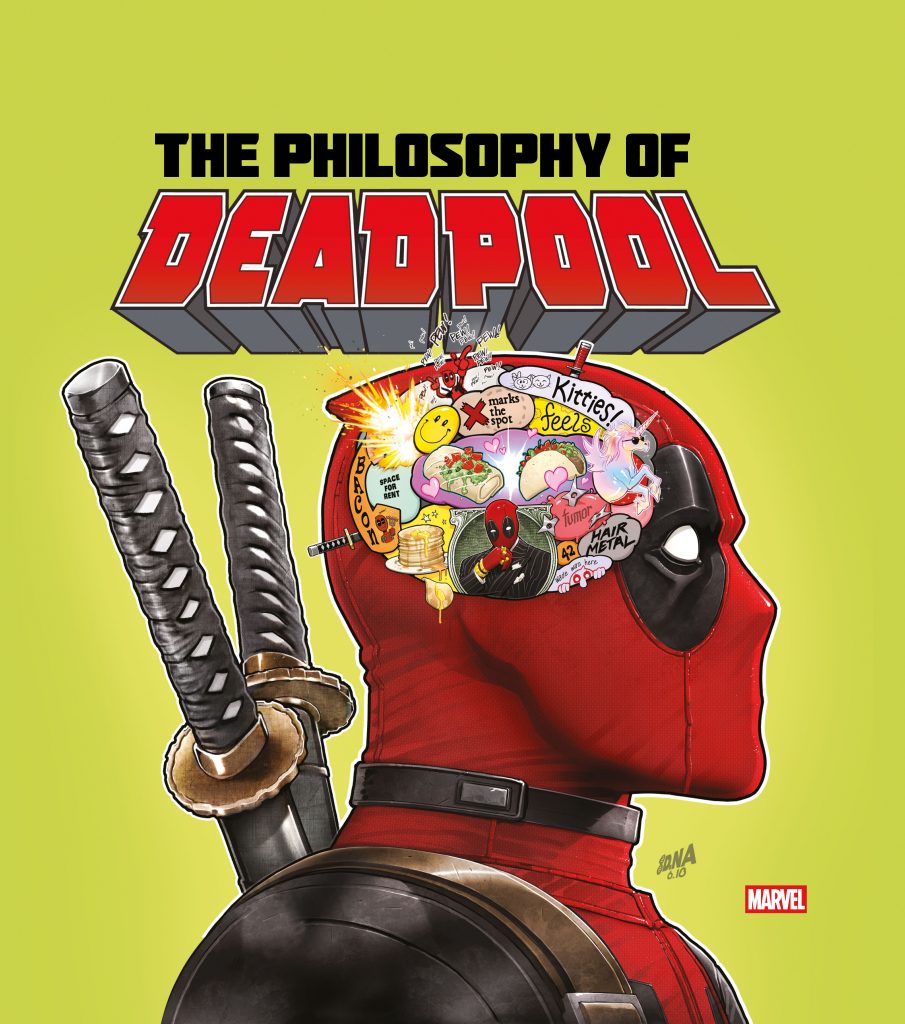 For those of you who may not know, the fourth wall represents the proverbial wall between the audience (us) and the characters on the screen, the stage, in a book, or in this case, a graphic novel revolving around the Merc with a Mouth, Deadpool AKA Wade Wilson of Marvel Fame.

Right out of the gate, we see a simple cover showing an excellent overview of what goes on in DP’s head. Merely a couple of title pages in, we get a “Fourth Wall Breaking” letter from Deadpool, giving a concise description of what is to come to whet your appetite. This is going to be a wild ride, so buckle up your seat belts and strap on your helmets, as we travel through the mind of Deadpool!

If someone ever argues to you about comic book accuracy, be sure to show them this Graphic Novel, and they will be able to see the difference between the on-screen DP and the comic DP in a single sentence. Did you know that Deadpool once boxed Abe Lincoln? At one point he did, it was in a boxing ring, and there was a crowd and everything. Deadpool has fought so many characters out of the Marvel Universe that I could write a whole other article on that topic and still only scratch the surface. Not only has he fought and killed the entire Marvel Universe a few times, but he has also been killed multiple ways too. He once shot himself, the Hulk ripped him limb from limb and wait until you see what Thanos did to him.

Deadpool has been around since 1991. In his almost 30 years, he has been around the block a time or two, so he would have some knowledge about life. Well, he can fight his way through a mob of people, and not only that, but he can also help you find love in a lonely world. Remember that first impressions count, and to always be practicing your small talk. Despite him being off the wall crazy, he still knows that respecting others’ boundaries is important; after all, he sure has learned this lesson many times form many of the formidable femme fatales in the Marvel Universe.

Everyone loves something, for Deadpool, it is no different. It doesn’t matter if it’s Taco Tuesday or if someone put Hellcow in the corner. He will not think twice about creating a mountain of 372,844 pancakes if for no other reason than because he loves them. Nor will he stop to think about if he will get hurt to save helpless animals. Deadpool might be more of a hero than anti-hero; PETA may want to think about reaching out to DP to help with their animal rights activism.

You may like to cosplay, but did you know that Deadpool also likes to dress up in costumes too, and no, I am not referring to alternate colors to his usual attire like his stealth suit. Being that he also time travels and visits other dimensions in the Multiverse, it’s no wonder that he is a great cosplayer, he could for sure pass for a pirate. Oh, and wait until you see him and Spider-Man during that time he wore a dress.

I’m sure many of you know about Deadpool and Spider-Man teaming up, but did you know he has had many other team-ups. From Cable and Mad Cap, to Punisher and a mutant, you will never guess, I’ll give you a hint though, his name rhymes with Polverine… he, for sure, has had several team-ups that I never even was aware of, and now I want to go and read them.

If you are a fan of all the alternative Deadpools, then you are sure in for a treat. How about a world where everyone is also Deadpool? DP pretty much has his own “Lantern Corps” kind of thing; only all of the soldiers are a different version of DP. The more I read, the more amazed I am at the level of creativity at how many different versions of Deadpool they could come up with, you are sure to be impressed!

This is a different kind of graphic novel. While it still features all the necessary needs of a graphic novel, it’s not a traditional one. It’s more of a documentary in comic book form all about Deadpool, his life, the way he sees the world, why he fights, and deep down to show us readers that even someone as crazy and trigger happy as the ‘Merc with a Mouth,’ can have a genuine and real love.

While reading this, I felt like they strung a bunch of random moments in Deadpool’s life together to portray a specific part of Deadpool. In the end, though it all comes along and you understand that while the chosen panels may seem random and they don’t make sense, they are giving you insight as to who DP is. I recommend reading the back cover after you have read the whole book.

The artwork stands out as it should. Seeing that the panels are taken out of various comics, the art can vary greatly, but despite all the styles, they all work well in portraying Deadpool as he should be. The panels are laid out differently on each page, and some are entire comic book pages downsized. Being that this is an informational comic book, each page has a caption and then a panel to demonstrate what the text means and you are always surprised by what comes next, even if you read the table of contents before reading the book, you will never quite know what to expect on the next page. This air of mystery adds a mysterious element to it that makes the reading experience enjoyable and exciting to read. I almost couldn’t put it down since I was always eager to see what they could do on the next page. The chapter on the different team-ups is probably my favorite out of all the chapters as I never expected to see some of the team-ups they showed.

Something I would have liked to have seen would have been more titles or labels of who specific characters were. I don’t read too much Deadpool, so some of the characters I saw I had to rack my brain to remember before I looked it up. Also, I would have liked it if they would have created reference bubbles for each panel so I could then go and read those comic books that these scenes taking place in.

Overall, this is one book every Deadpool fan should read. If you want to learn more about DP, you should read this. This is very enjoyable to read; you can easily pick it up and start reading from a random page and find enjoyment. There are even fun hands-on activity that is sure to make you smile.