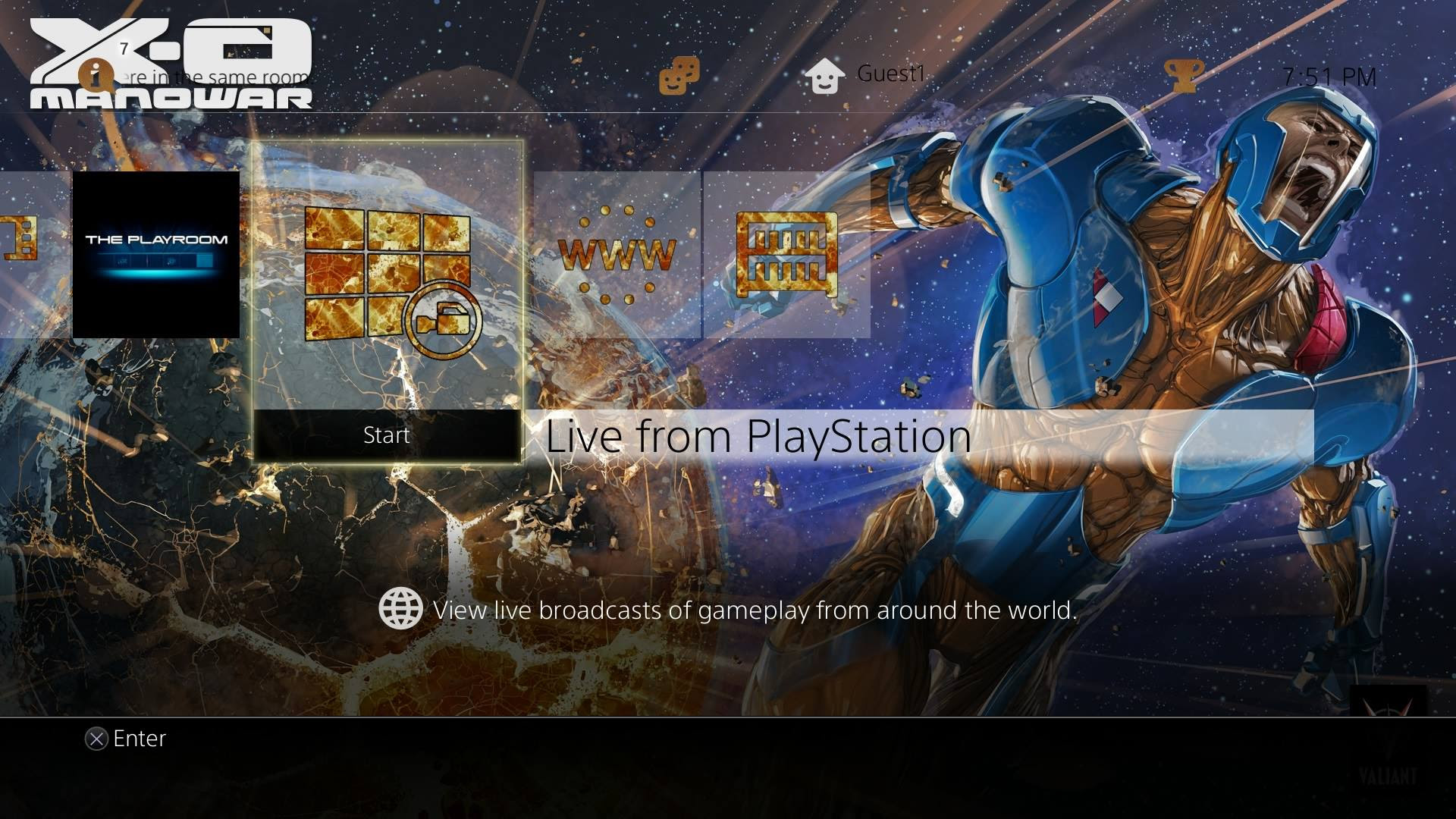 “Valiant is constantly striving to reach new fans through new and exciting outlets,” said Russell A. Brown, Valiant’s President of Consumer Products, Promotions & Ad Sales. “Through our partnership with The Powell Group, Valiant’s diverse lineup of characters are now leaping off the comic page to the PS4 screen, showcasing the brilliant artwork that has helped catapult Valiant to become one of the leading publishers in comics today. We are thrilled to introduce the Valiant Universe to an entirely new medium with The Powell Group’s new themes.”

About X-O MANOWAR:
Born into battle, Aric of Dacia, the fifth century Visigoth now called X-O Manowar, has never known peace. Abducted and enslaved by the savage alien empire known as The Vine, Aric finally escaped his captors after stealing their ultra-powerful X-O Manowar armor and then returned to Earth…only to find that more than a thousand years had passed in his absence. Stranded in the modern day, the most primitive man on Earth now wields the most powerful weapon in existence as X-O Manowar!

About BLOODSHOT:
Brought back from the dead and infused with cutting-edge nano­technology, Bloodshot’s nanites made him a nearly unstoppable kill­ing machine. His enhanced strength, speed, endurance, and healing made him the perfect weapon, and he served his masters at Project Rising Spirit – a private contractor trafficking in violence – very well. But after defying his programming and escaping his captors, Blood­shot now fights to rediscover to the secret of his true identity – but remains haunted by the past that nearly destroyed him.

About HARBINGER:
You’ve never met a team of super-powered teenagers quite like the Renegades. Skipping across the country in a desperate attempt to stay one step ahead of the authorities, psionically-powered teenager Peter Stanchek only has one option left – run. But he won’t have to go it alone. As the shadowy corporation known as the Harbinger Foundation draws close on all sides, Peter will have to find and recruit other unique individuals like himself… other troubled, immensely powerful youths with abilities beyond their control. Their mission? Bring the fight back to the Harbinger Foundation’s founder Toyo Harada – and dismantle his global empire brick by brick…

About ARCHER & ARMSTRONG:
After years of meditation and training, 18-year-old Obadiah Archer has been dispatched to New York City to carry out the sacred mission of his family’s sect—kill the booze-addled immortal known only as Armstrong and convene a new world order! But as this underage assassin stalks his prey, he’ll soon find that both hunter and hunted are just pawns in a global conspiracy stretching back five millennia and that Archer & Armstrong will have to work together if the future is to stand any chance of surviving the past’s greatest threat!

About RAI:
The year is 4001 A.D. – led by the artificial intelligence called “Father,” the island nation of Japan has expanded out of the Pacific and into geosynchronous orbit with the ravaged Earth below. With billions to feed and protect, it has fallen to one solitary guardian to enforce the law of Father’s empire – the mysterious folk hero known as Rai. They say he can appear out of nowhere. They say he is a spirit…the ghost of Japan. But when the first murder in a thousand years threatens to topple Father’s benevolent reign, Rai will be forced to confront the true face of a nation transformed…and his own long-lost humanity…

About QUANTUM AND WOODY:
Once upon a time, Eric and Woody Henderson were inseparable. Adopted brothers. Best friends. Brilliant minds. Years later, they are estranged siblings, petty rivals, and washed-up failures. But when their father’s murder leads them into the throes of a life-altering scientific accident, Eric and Woody will find themselves with a whole new purpose – and a perfectly legitimate reason to wear costumes and fight crime. Go big or go home, folks! Quantum and Woody are coming!

About SHADOWMAN:
There are a million dreams in the Big Easy. But now its worst nightmare is about to come true. As the forces of darkness prepare to claim New Orleans as their own, Jack Boniface must embrace the legacy he was born to uphold. As Shadowman, Jack is about to become the only thing that stands between his city and an army of unspeakable monstrosities from beyond the night. But is the mantle of Shadowman a blessing or a curse? And what is the true cost of his otherworldly power?

Purchase your theme now in the PlayStation® store and enhance your gaming experience today!