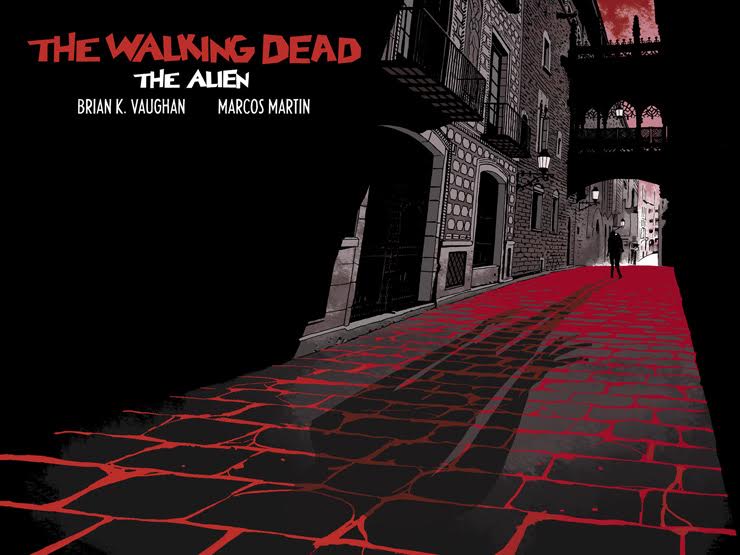 Vaughan and Martin’s The Walking Dead: The Alien takes the outbreak worldwide

(Victor Valley)—Brian K. Vaughan and Marcos Martin created something amazing and innovative with The Private Eye, a series that was meant to be purely digital and on a “pay what you want” platform. When Image Comic’s Robert Kirkman wanted to collect The Private Eye and print it as a hardcover, what Vaughan wanted in return was no small feat: to create an all digital, pay what you want story for The Walking Dead with Private Eye artist Martin. What we got is now available online: The Walking Dead- The Alien.

Set weeks after the zombie outbreak first began, we meet, Jeff, a young traveler in Barcelona, trying to save a boy from a pack of zombies, only to be saved himself by a knight in shining armor, literally: Claudia. She has heard rumors that the United States has a cure for this disease, and sets out to bring it back home. Of course, we all know how rumors are during an apocalypse. The duo make their way to the water to find a boat, and that’s when everything goes awry.

Vaughan and Martin craft an excellent story here, taking us to a place far away, but still in shambles nonetheless. Presented in black and white (and some red), just like Image Comic’s The Walking Dead series, the story does have a strong connection to the characters we know and love from the comic and television show, but I won’t name that connection here. Martin’s artwork looks so crisp and clean, and yet conveys the horror seen in the streets of Barcelona masterfully. Jeff and Claudia may be characters we never see or hear from again, but it was refreshing to see new faces in the never-ending zombie story.

The Walking Dead- The Alien is, for me, a very welcome addition to the TWD family.

This one shot is available right now at www.panelsyndicate.com and you pay what you want to download a digital copy. While you are there, make sure to check out The Private Eye, Barrier, and the other awesome books using this platform as well. You won’t be disappointed.