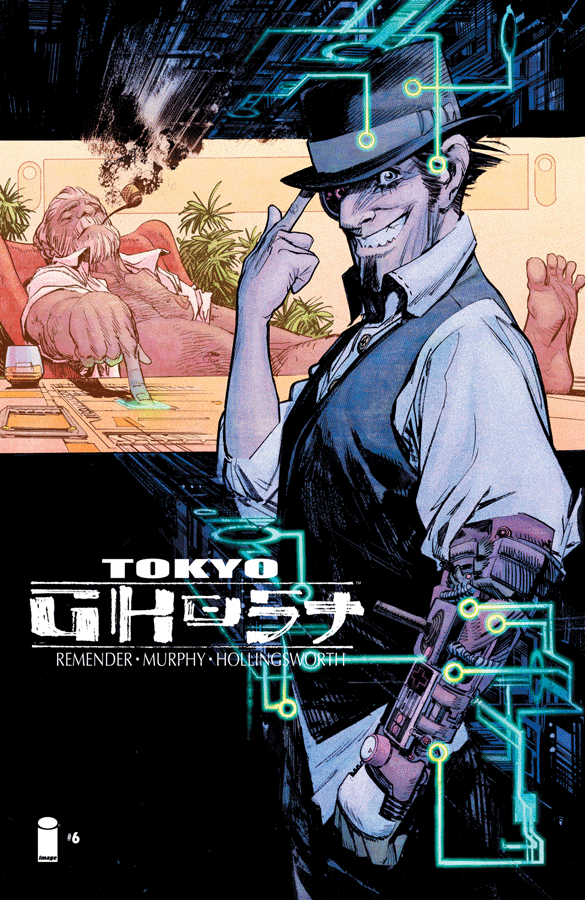 For a book titled Tokyo Ghost, I often wondered why such a title was chosen. I could see the Tokyo part, as it is one of the only places not infected with the technological addiction that is inflicted on humanity. But with this issue, it became obvious why this title is actually the perfect fit.

Rick Remender and Sean Murphy’s first arc introduced us to the unusual couple of Debbie Decay and Led Dent: Constables in New Los Angeles in the year 2089. Decay being one of the only humans with no tech implants in her body and her Dent being a hulking, technologically addicted shell of himself. But when sent to Tokyo for a job, they find paradise- a paradise free of any technology. Dent began to get back to is old self, but when the time came during a battle, he went right back to the tech horse he had been trying to kick and became a murderous, mindless zombie- killing those that had welcomed him into this paradise. That’s where this issue kicks off.

Dent has returned to New Los Angeles as a constable, back to his tech controlled ways. Mr. Flak, the titan in control of the tech and therefore, those that use it, still remains in power, having took over Tokyo and taking away its natural beauty. But when a ghost from Dent’s past comes seeking vengeance from the atrocities of Tokyo, the tables get turned and the title of this book now makes sense.

Remender’s R-rated futuristic tale that isn’t as far off from the way things are in modern times continues to impress. Murphy’s artwork is such a great fit for this dark and twisted reality, full of action, gore and tech like you have never seen. This kickoff to the next story arc takes off with the foot to the gas and doesn’t let up until that shocking last page. Tokyo Ghost continues to prove why it belongs on your pull list: it has remained on mine since issue #1.