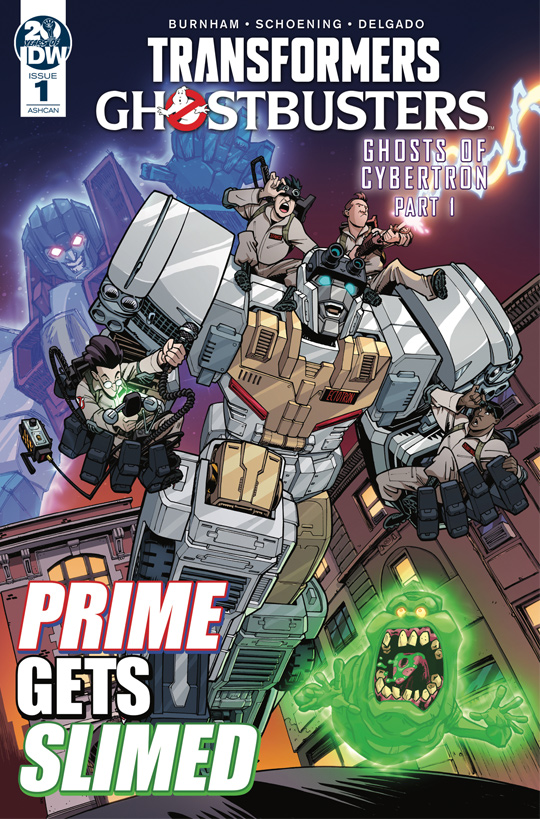 Warning: Spoilers for Transformers/Ghostbusters #1 below.

Peanut Butter and Bananas. Pineapple and Pizza. Some things seem like they should not go together, but end up being really good when they are.

Welcome to the world of IDW’s Transformers/Ghostbusters. Two childhood favorite franchises that seem like they should never come together are combined for an amusing and entertaining story, from writer Erik Burnham and artist Dan Schoening.

The arc (Ghosts of Cybertron) begins with the brief retelling of the Cybertronian civil war, with one extra plot point that has never been seen before. As the Decepticons prepare to chase the fleeing Autobots across the cosmos, they are confronted by Gozer (the inter-dimensional villain from the first Ghostbusters movie).  In a scene that hilariously mirrors the selection of the destroyer scene from the film, Starscream chooses the form of the destroyer. While in the movie, Ray chooses the Stay Puft Marshmallow Man, Starscream chooses the most obvious form in his mind, himself.

Following the destruction of Cybertron, the setting turns to Earth and the intrepid team of Ghostbusters. After discovering a second Ecto-1 on the scene, they get the surprise of their life when their beloved car transforms into a giant robot!

This issue was awesome! I was very nervous about two of my favorite properties teaming up, especially when they are not obvious crossover teams. Those nerves were quickly calmed as I went through the pages. The characterization of my favorite Transformers was spot on, which made it even more readable. I am really looking forward to issue #2!

Rating: 10 out of 10. The perfect mix of two teams that should never work together, but do beautifully.