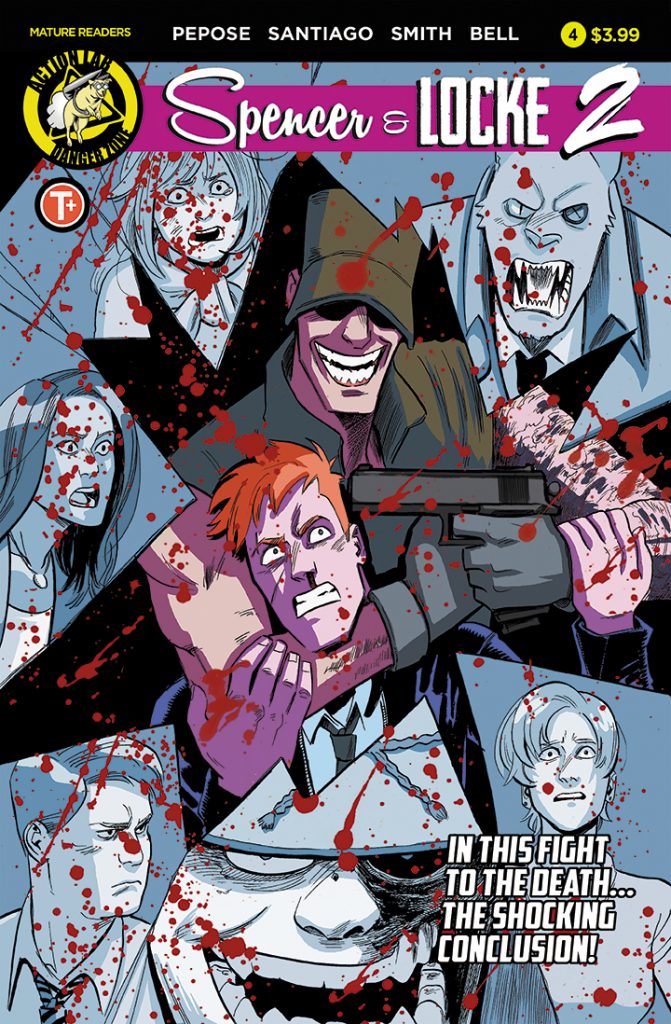 This chapter in the life of Spencer and Locke comes to its shocking conclusion in the last issue of Action Lab Danger Zones “Spencer & Locke 2”.

In this sequel, Detective Locke and his partner Spencer have been on the trail of a psychotic killer named Roach Riley, who is wreaking havoc through the city. Star reporter Melinda Mercury is on the case also as she tries to unravel the mystery behind who Roach is, what is really going on, and who might be pulling his strings. And even though the city is being destroyed and on high alert, a new hero emerges.

Issue #3 of this incredible series gave us a glimpse into the mind of Detective Locke. It took us down into the deep recesses of his mind and gave us a better idea of what makes him tick. It was a journey that dealt with the trauma of his past, but also reminded him of why he must continue to keep fighting, at all cost. If not for him, then he was going to do it for Hero, his daughter. It also continued star reporter Melinda Mercury’s story as she gets closer to finally figuring out what is going on, and she uncovers a truth about Roach that will change everything.
In this final issue of Spencer & Locke 2, all bets are off. Melinda cracks the case, but it might already be too late. Roach is on a mission to carry out an unspeakable act of violence unless Spencer and Locke can stop him. It all comes down to a fight to the death when Locke must make a choice, one that will have everlasting consequences on his and his daughter’s lives.

“In this fight to the death… The shocking conclusion!” reads the tag line on the final issue of Spencer & Locke 2, and shocking it is. This is easily one of the best issues of the series, and also one of the most thrilling issues of a comic book I have ever read.

Writer David Pepose is able to infuse drama, suspense, action, and real emotion seamlessly, and it stands out in this issue. He is also able to bring a human side to the monster that is Roach Riley, someone who is hell bent on causing death and destruction. Although his actions are that of a madman, we find out that he isn’t a monster at all, but someone who is suffering from loss, trauma, and PTSD. And it’s through this that we see the mirror image of our hero, the one we have been rooting for the whole time, Detective Locke. The two might not be so different after all, and by the end of the issue, with the help of Spencer, you will see just how similar they really are.

And let’s talk about Hero. She’s played a pivotal role in Spencer & Locke 2. If it wasn’t for her, it’s a good bet that Locke would have given up a long time ago. He’s a tough guy, but he’s also a guy at the end of his rope. Hero has also had a transformation throughout the three issues that nobody saw coming, and it was great to see. She went from a shy and quiet little girl to her own type of superhero, one that as a father, makes perfect sense. She is trying to follow her dads’ footsteps in the best way she knows how, and catching the bad guy is what her dad would do. It’s been a great arc, and I’m excited to see what the future holds for her.
Speaking of the future, I’m curious where this story goes from here.

Without giving too much away, the ending sees our titular heroes at a crossroads. Events that occurred cannot be taken back or forgiven. One is convinced that it was for the greater good, while the other must deal with the consequences. It’s a sad ending for sure, and one that I’m hoping will be picked up at a later date, hopefully with “Spencer & Locke 3”.

The writing is absolutely incredible, and the artwork by Jorge Santiago Jr and Jasen Smith is terrific. I’m positive that within the artwork, there is stuff that I’ve missed throughout the series that I’m anxious to take a look through again. It’s so detailed and lived in that it’s hard to catch everything the first time around. I will definitely be giving it a second look.

It was an absolute blast going on this adventure with Spencer, Locke, Hero, Melinda and even Roach. This final issue brought a satisfying end to this chapter but also left it open for a lot more to come. It was thrilling, exciting, and full of real human emotion. It’s everything you could ask for in a book, and I highly recommend picking it up.