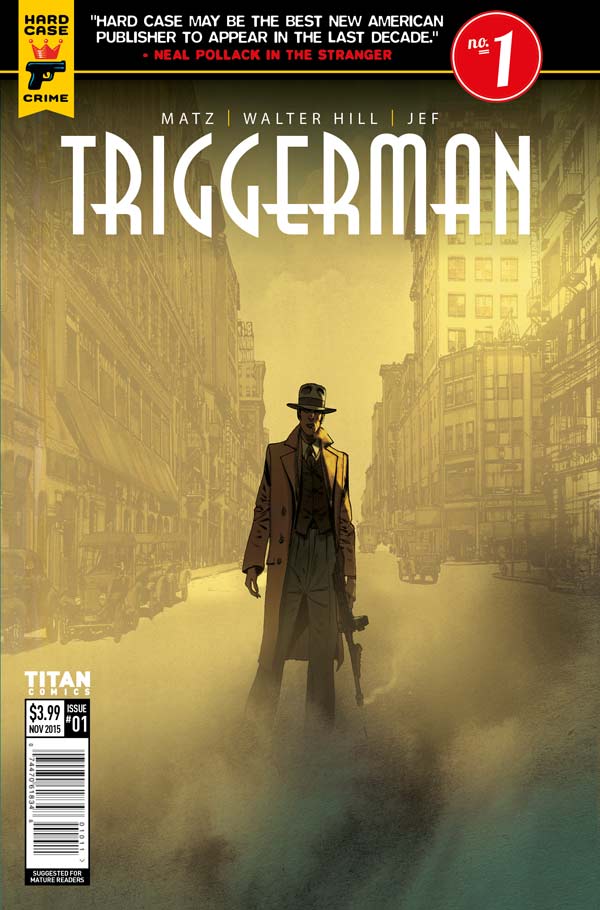 Titan Comics has brought the world quite a few great comic book series and graphic novels, ranging from time traveling heroes to master assassins to samurai. With their Hard Case Crime imprint, Titan is bringing pulp crime stories to the comic book page, and they kick off with Triggerman. Warning: this is a mature audience title, definitely not for children!

From Walter Hill (The Warriors, Red Heat, Last Man Standing) and French comics writer Matz with art by Jef, this debut issue hits hard, and utilizes the unique comic book art medium perfectly. Set in the 1930’s, the book focuses on a lone stranger on a mission; Roy Nash. The opening scene at a lonely bar in Arizona as Nash exacts vengeance on someone who owes the mob is something that should be added to a master class of comic books. The diluted hues, the artistic music notes denoting music is playing from the jukebox, the bullets that spray from the weapon of a killer- this is a prime example of visual storytelling by way of sequential arts.

We get to see flashbacks of Nash’s life, being in prison, and ultimately being sprung to do work for the mob. We also see flashes of a woman who Nash obviously still holds a candle for. We get enough seeds planted to make us want to return next issue to see exactly what’s next for Nash on his path of destruction. The look and feel of the book is unlike anything on the shelves right now. Titan has done the world of comic books a huge service by kickstarting the Hard Case Crime imprint, and they have the perfect book to pull the inaugural trigger.

Triggerman #1 captures the essence of a pulp crime throwback, and once again shows the diversity of genres the industry can encompass.