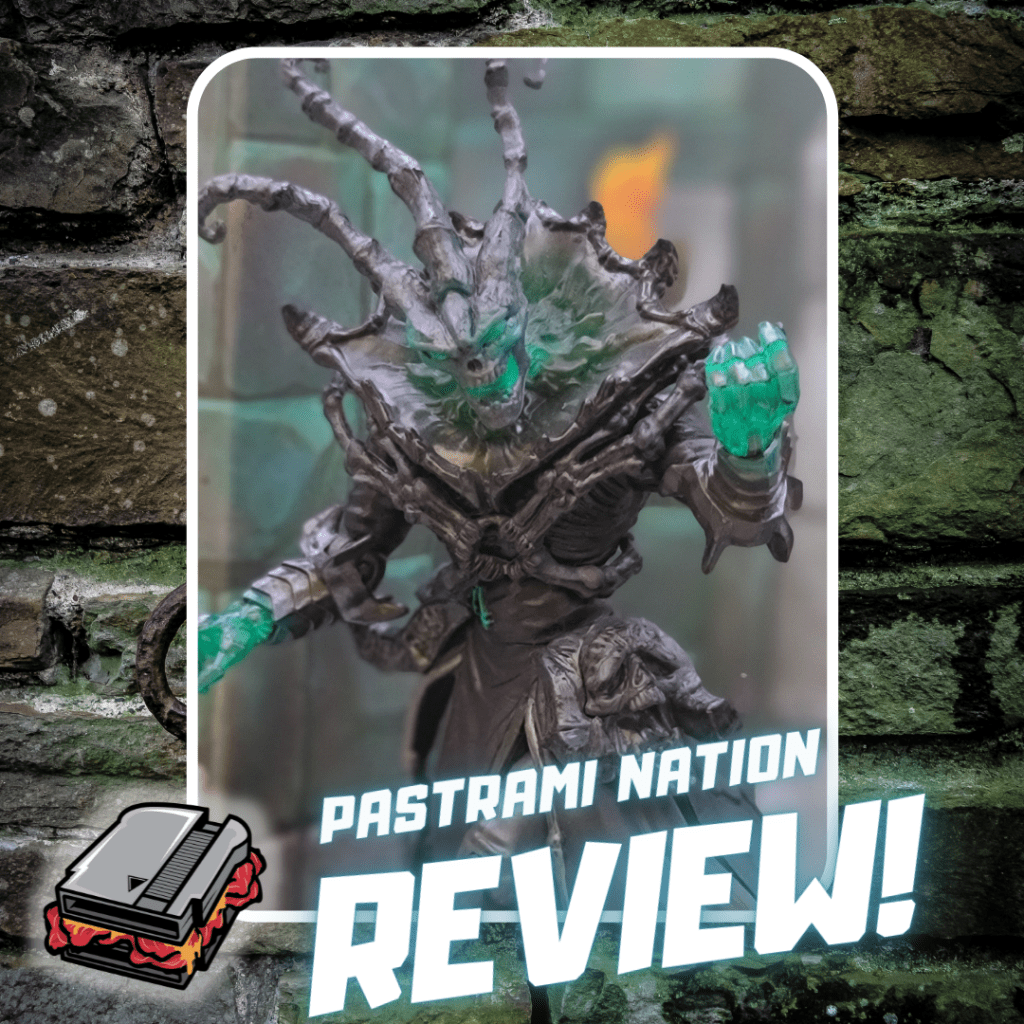 I’ll be honest right off the bat- I am not familiar at all with League of Legends. I know it’s a game and has an animated movie coming out soon, but that’s it. So when I got my hands on a League of Legends action figure, I was a bit thrown off. But even if I don’t know the back story to the game, it doesn’t mean I can’t determine if the action figure is a home run or a foul ball.

I am checking out the Thresh figure from Spin Master, part of The Champion Collection of six-inch scale figures. The package says he is a chain warden, a spirit of Shadow Isles that imprisons souls in his lantern to torture for eternity. That all sounds amazing. Very fitting for a character that oozes out pain and death in his design. The figure comes with a long vine-like accessory with a sickle that attaches to one end and a lantern that hangs off of the other, as well as a simple base.

Let’s break down this figure. This is my first figure from Spin Master, and let me say- they did not disappoint. The sculpt and design of this figure are exceptionally well done- from the translucent green hands (that can actually hold weapons and not break!) to the extreme amount of details on the cloak, armor, and the back of the figure, this is a really well-made figure. It comes with articulation on par with Marvel Legends and DC Multiverse- turntable waist, double-jointed knees, ball swivel legs and arms, and the ball joint on the head (which gets some decent motion up and down). The paint apps here are killer as well, with a blend of glossy and matte finishes that make certain elements pop. The accessories are excellent as well- that lantern is all kinds of cool. Having it on a vine instead of a staff is weird, but I’ll allow it (anyone? Ok, I’ll stop). I would have liked more accessories, like an alternate head and extra hands, but this is amazing for the first line of six-inch League of Legends figures.

Not knowing anything of League of Legends, I can say this figure would fit perfectly with your 1/12 scale figures, especially with the likes of Conan or Mythic Legions. But he can also be posed to terrorize the 1/18 scale figures- why not? Thresh is a fantastic figure and a welcome surprise this holiday season. I will be keeping an eye on what Spin Master delivers next.

Nolan P. Smith is the Editor in Chief and Co-Founder of Pastrami Nation. He has worked for various media outlets for the past ten years, from newsprint to the ever-evolving internet platform. Residing in the High Deserts of Southern California, writing has always been a significant aspect of his life. A reporter, teacher, public relations specialist, and more, he takes the most joy out of covering the world of pop culture. You can follow him on Twitter and Instagram at @pastramination. Have an action figure or comic book you would like considered for a review? Feel free to reach out!