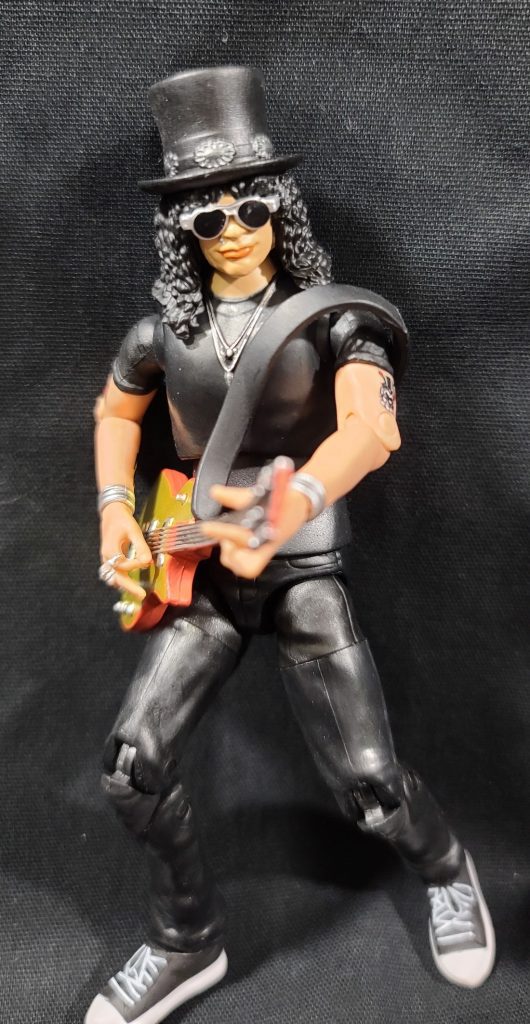 The Loyal Subject have been making fantastic vinyl figures for years now. From their Masters of the Universe line to characters like Edward Scissorhands and Gizmo, they have made figures from all aspects of pop culture. Their new line of action figures offers an incredibly diverse lineup, including a rock legend, Slash.

The BST AXN figure line up has characters from anime, movies, and more. With this review, we look at the iconic Slash. Growing up, I was raised on rock and rap, so the musical landscape had a mix of 2Pac, Wu-Tang Clan, The Eagles, and of course, Guns N Roses. Slash is easily one of the most recognizable musicians in the world, and now he is a five-inch action figure. The Guns N Roses/Velvet Revolver guitarist comes to life, sporting his trademark hat and guitar. Dressed in all black, this is the Slash fans know.

Boasting 22 points of articulation, this is one impressive figure. This is the first BST AXN figure I have picked up, and it is incredible. The weight of the figure is excellent for a five-inch figure. It is a sturdy build, with a guitar that fits perfectly. I love the articulation and sculpt on this figure, and honestly, I am kind of amazed we actually have a Slash figure now. The Loyal Subjects did a tremendous job here, and I cannot wait to track down more.