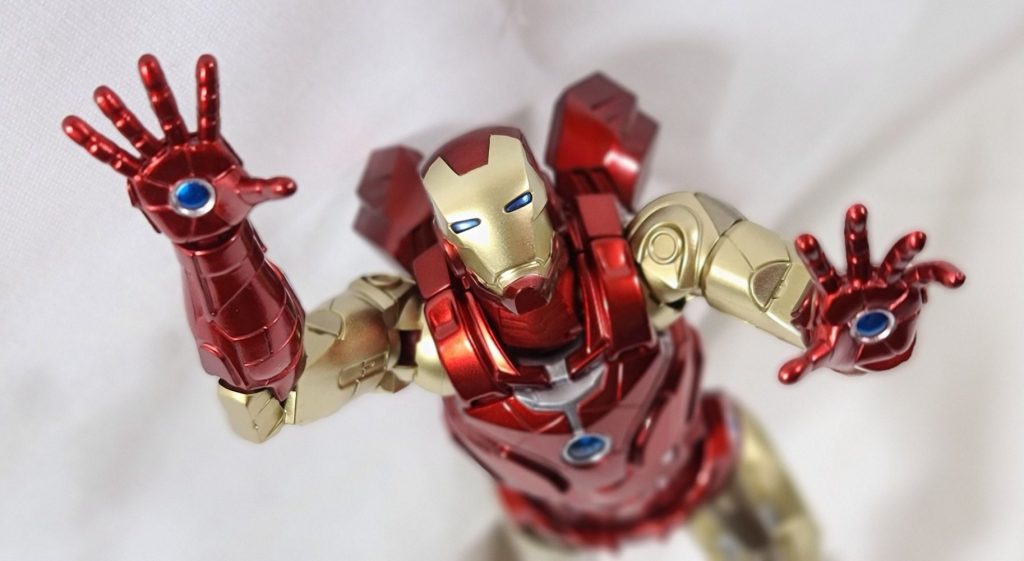 Not all action figures are the same. So in case you are wondering, “why another Iron Man?” Figure, remember that. Bluefin Brands and Sentinel have released the first in their Fighting Armor series of figures, and they kick it off with the man himself, Mr. Tony Stark- Iron Man.

The six-inch tall figures comes complete with four additional hands and a figure stand. The figure is loaded with articulation as each joint is made to work like the joints on a human body, and you can tell the difference. The figure is made of plastic and die-cast parts, which gives the figure an impressive weight and balance. It helps when it comes to posing this figure, which is always nice. The figure even has opening and closing shoulder repulsors on his back, which is such a cool added feature.

I love the way this figure looks and moves- it’s a sight to see. For being a 1/12 scale figure, it ranks up there with many of the high end 1/6 caliber figures. I compared it to the Punisher War Machine Marvel Legends figure, and there really is no comparison. Both figures scale well and look great next to each other, but the difference in quality, paint, and detail is night and day.

This is the first in the Fighting Armor line of figures, which includes upcoming releases like Iron Spider and Captain America. If Iron Man sets the bar for this line, then you have a contender for toy line of the year. Sentinel and Bluefin have brought the world one of the best Iron Man figures I have ever seen or owned; make sure to pick up yours today HERE.