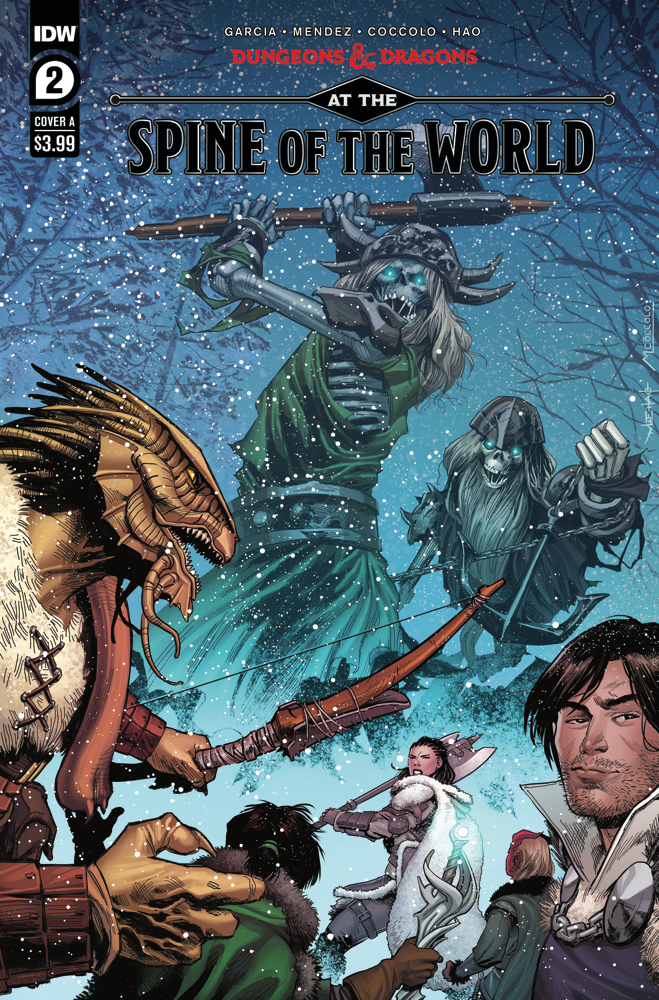 Comic Book Review: Dungeons and Dragons- At the Spine of the World #2

We open with the party making their way through a snowstorm. The party is starting to bicker when Runa the Barbarian locates a cave for them to rest in. After Belvyre the Druid starts a small bonfire, Runa stands guard, and the rest of the party rests. Saarvin tells Runa that they should all stand guard in shifts, but she turns him down, telling him of a time she hid in a tree for 48hr waiting for her prey. Footsteps are heard during their conversing and what looks to be a budding romance between the two warriors. Runa leaves to survey the area. While Saarvin attempts to calm the rest down, Runa comes back, letting them all know that a Frost Giant Skeleton made the sounds of footsteps. The next thing they know, a giant skull with glowing blue eyes pokes its head down…

The rest of the comic is pretty awesome, and I had a hard time stopping; in fact, I couldn’t bring myself to stop; I had to see it through to the end. Not a whole lot actually happens during this but what does happen makes you wonder how epic this tale is going to be. The fights are thrilling, and the dialogue is funny. I found myself laughing at the jokes, and none of it felt weird. I could see myself speaking like them or hearing other players speak like them if I was playing a game.

I really enjoyed reading this and imagining what was going on at the table, assuming this is made out of actual roleplay. That’s something I really enjoy about this; I can’t tell if they are making up the events or if they are recorded from actual play using the sourcebook. It could very well have been played out, and someone wrote down all the events that transpired during the session. That would explain why the comic book itself felt short.

During play, these events would have taken a few hours to get through since combat is usually much longer during play than it actually is if you were to watch the characters fight, it makes sense that each comic book is equal to one second. Depending on their rules for combat, big fights can take an hour or more during a roleplaying session. During my games, each turn is usually carefully thought out, and all options for what the character would do is considered; these turns represent six seconds of combat. With the party the size of five players, this means that each round would last at least 25 seconds for the players. For those of you who don’t know, a round is when each character has had a turn and depending on how many characters there are, a round might go a minute or more in real-time. Experienced Dungeon Masters would have all of their NPCs go at the same time, most likely, so that would mean a single round of combat would last 30 seconds with a party the size of five players. In real-time, the actual combat only lasted a few minutes, which we got in the final product of this comic book. It is super cool seeing how that all translated from tabletop play to comic book, and it just makes the whole thing that much cooler.

Another thing I like is their use of colors; with this taking place in the icy north, the scenery is very snow white, so they were able to put more details into the characters, and they managed to keep it feeling like this adventure is actually taking place in a location rather than on a blank page.

Now assuming this whole comic represents a single session, the book felt rather short and more to be desired. I would have liked more of an aftermath to what happened and more interaction between the characters as a whole. I think it would have been much more enjoyable to read if they made the comic book more than one session long; this will probably be a much nicer read when they come out with the TPB (Trade Paperback) of this entire adventure all rolled up into one single book. Another thing that would have been nice to add, which would have also lengthened the comic book, would have been to add something inside the cave they rested in, such as a bear or even a fake-out, to make things a bit more interesting; I am curious to know if there is anything else going on with the cave other than it being empty.

All in all, I enjoyed what I read. I am looking forward to reading more; I hope that this story will last awhile and have many comic book issues, maybe even adding more adventures in Ice Winddale once this current one is finished.

Jeremiah Gagnon
0
Tags :
Comic Book Review: Dungeons and Dragons- At the Spine of the World #2