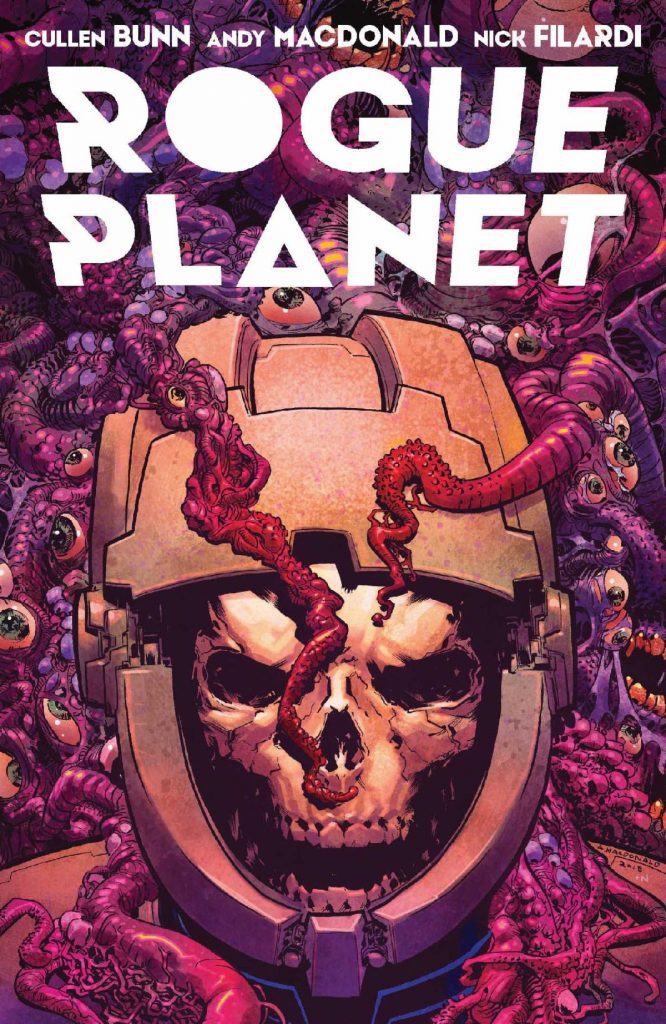 This collaboration of a five-issue series was more than I expected for a Sci-Fi Horror comic. Wow! Published by Oni Press, Rogue Planet is written by Cullen Bunn as he takes us on a journey into the deep, dark, horrifying space. Within the first few pages, I saw some similarities from the writings of Ridley Scott’s Alien. Though the similarities, Cullen takes us on a terrifying quest on the vessel Cortes that lands on the isolated planet called Lonely Orphan. This is a planet with no solar system. The crew, led by Captain Joel Narris, is taken on a mission through space as they are in a deep sleep only to discover a deadly alien creature. Cullen gives a good description of Narris and the other crew members. This helps us get to know each of the characters as they individually enter into their own survival and horror.

The artwork of Rogue Planet is undeniably fantastic. Andy MacDonald is an amazing artist who captures great linework and imagery and does an excellent job designing aliens, monsters,the spaceship, and the crew’s suits. The gruesomeness of the alien monster is astonishing. Through his drawings, he illustrates the horror of the planet, the uncomforted of the spacesuits, and the cold, small, tight space of The Cortes. I could not help being reminded of John Carpenter’s The Thing while seeing the drawings of MacDonald and the colors by Nick Filardi. I was completely drawn to the artwork, which influenced me to read this comic.

While reading Rogue Planet, there are some excellent sound effects that take place. From the quietness of the drifting through space to the alien creature’s haunting sound effects, this book truly puts the reader into every scene. Not every comic can capture the sounds of the story through the writing or artwork. However, Rogue Planet does an excellent job.

In Rogue Planet #1, after the crew lands on Lonely Orphan, they are encountered by a grotesque alien with a massive amount of teeth and eyes. The survival of the crew explodes after a crew member is attacked. The first book leads you into a suspenseful roller coaster that keeps the reader wanting more. Issue #2 takes place where Issue #1 leaves you in suspense. At the beginning of this issue, there is some tension surrounding the crewmate’s death, and fear is lurking around every corner. There is no safe place on this planet. And within the Cortes, tight spaces allow tension to grow stronger as the parties differ.

The horror tends to build. Although there is no additional character building in this issue, you do learn more about the surroundings. Issue 3 picks up the pace and continues the horror. While the rest of the crew are protecting themselves in the Cortes, they can’t escape the gruesomeness that surrounds them inside and out. After being teased by the first two issues, the speed of this third issue the terror intensifies. The monsters appear more predominantly in the third issue displaying if their horrific plans for the crew members. The dialogue also seems to dive more into the personalities of the characters. Bunn’s writing skills are incredible. He does such an amazing job keeping the audience captive. Lonely Orphan constantly reveals even worse possibilities for the crew and the danger of losing their lives. There is also some history building in the issue that gives the reader some background of this unpredictable world. An incredible fight breaks out at the end of the issue the builds even more suspense and expectations for the next issue. In Issue #4, the intensity continues to build. The crew learns more about the planet they’ve landed on and are desperate to escape. They are in grave danger the longer they stay. As their escape seems more promising and the attempt appears closer to success, the threat is more frightening than ever.

Four is a highly rapid-paced issue that builds up an intense ending to an extremely well-written tale. As the volume comes to a close, Issue #5 delivers. There are only a few crew members left and a destroyed ship, the leftover crew discovers another ship that has crashed on the planet, and they have exposed more secrets about the alien monsters. There are different discoveries through the carvings on walls by the original race—a lot to be explained in this issue. As the crew identifies this planet more and more, the more the planet becomes more of a character itself. Never had I gotten as attached to the characters as much as I have been drawn to the planet Lonely Orphan. Rogue Planet #5 is a terrific end to a fabulous horror series.

Rogue Planet Vol #1 was more than I expected. I truly enjoyed reading this series.