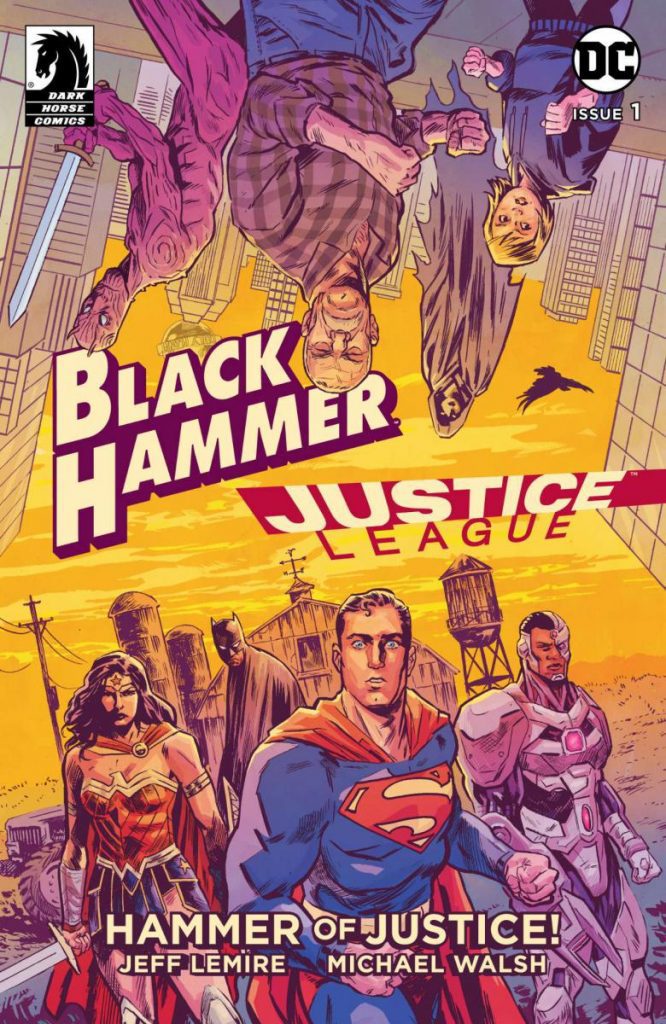 One team is the premier supergroup in the DC Universe; the other is a universe displaced shell of the world’s greatest heroes. Thanks to DC Comics and Dark Horse Comics, we get the crossover I never thought would happen: Black Hammer/Justice League comes together for the Hammer of Justice.

From Jeff Lemire and Michael Walsh, the book serves as the perfect set up in what is sure to be a bizarre and fantastic confrontation. We see the heroes of the Black Hammer universe, stuck at the mysterious farm that kept them closed off from the world, as we get a proper introduction to the team: Abraham Slam, Walky Talky, Colonel Weird, Barbalien, and Madame Dragonfly. All separated from the world and their leader, the Black Hammer. We also see the heroes of the DC Universe fighting a familiar villain to the DCU: Starro. But an enigmatic visitor comes across both teams, and somehow swaps the teams to the other’s universe. The book ends with a very cool cliffhanger, as the heroes of both worlds come together, even in the weirdest of ways.

I am not going to lie; Black Hammer is one of my favorite books and franchises around. I love the stories, I love the humanization of these super-powered heroes, and I love the expansion books, like Doctor Star and The Quantum Age. Lemire bringing our heroes together is a dream come true, and this issue serves as the perfect set up. Walsh’s artwork looks fantastic, both for the Black Hammer and DC Universes. I know the action will ramp up, but the beauty of Black Hammer books is that every issue doesn’t need a titanic tussle- sometimes it’s a fantastic story with heartfelt moments and true to life characters.

I loved this debut issue, and I am anxiously awaiting the second issue. This is history in the making, and if I were you, I would get in on the ground floor of this sure to be epic crossover.