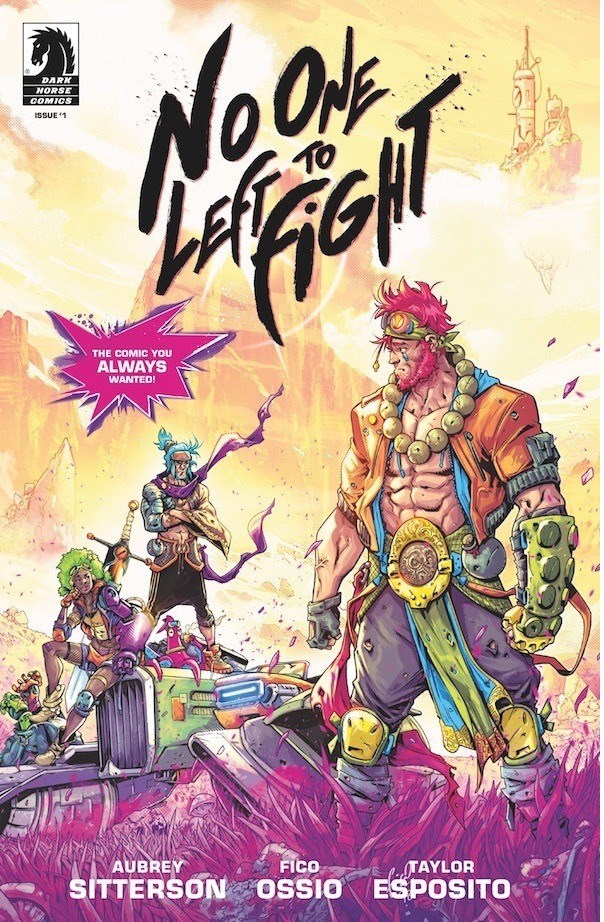 Advance Review: No One Left to Fight #1

I love comic books, of course. But I also love anime and manga just as much. So when Dark Horse announced No One Left to Fight as ‘inspired by Dragon Ball,’ I was intrigued and a bit nervous. Those are enormous shoes to fill, even for a title inspired by the storied anime franchise. What we get is an interesting and colorful, and very well done, debut issue.

From writer Aubrey Sitterson, who did a fantastic job on Street Fighter X GI Joe, and artist Fico Ossio, who has done tremendous work on Transformers, this creative team brings us one of the most eye-popping debuts in recent memory. Our hero is Vale, a skilled hero who saved the world in a seemingly titanic fight. A wanderer of sorts, he goes to visit his friends, Krysta and Timor, and that’s when things turn a little crazy. Reading the comic, Vale’s character and the dialogue feels like Goku, whereas Timor’s vibe is a dead ringer for Vegeta. I could almost hear their voices as I read through this issue, which is fantastic writing on the part of Sitterson.

We don’t see a whole lot of action here, but what we do get is high octane and frantic, reminiscent of DBZ. Lots of blur fast punches, announcing moves as they happen, and with an ending that feels like it’s inviting us back to the next episode of Dragonball Z, this is a love letter to the trailblazing manga and anime, and I love it. Sitterson and Ossio create something amazing here, with a spin that will twist the similarities between this and DBZ. As the titles says, there is no one left to fight, so what will do battle-hardened warriors that live for the thrill of battle do? I can’t wait to find out. Give No One Left to Fight a shot, and if you are a fan of Dragonball Z, you can thank me later.