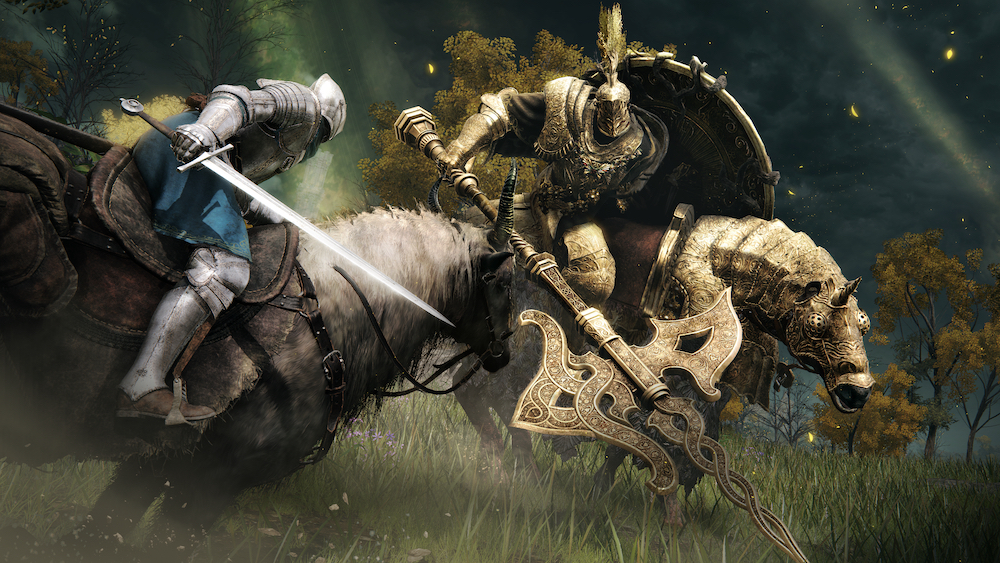 A grand adventure across The Lands Between awaits as BANDAI NAMCO Entertainment America Inc. releases ELDEN RING™, an expansive Action-RPG game developed by FromSoftware Inc., for the PlayStation®5, PlayStation®4, Xbox Series X|S, Xbox One, and PC via STEAM®. Escape into a sprawling realm steeped in a rich and bloody history crafted by Hidetaka Miyazaki – creator of the influential and critically acclaimed DARK SOULS® video game series; and George R.R. Martin – author of The New York Times’ best-selling fantasy series, A Song of Ice and Fire.

Take on the role of a Tarnished, a visitor from another land washed ashore onto the edge of the brutally broken realms of The Lands Between. Devastated by the shattering of the Elden Ring, which kept peace and order throughout the land, players must hunt down former rulers and demi-gods to piece the Elden Ring back together and take the mantle of Elden Lord. From heavy-hitting knights, nimble thieves, elusive archers, and powerful sorcerers, or a mix of multiple disciplines, ELDEN RING allows for a true role-playing experience giving players the ability to experiment and find their preferred play style. Equip skills to weapons from a myriad of options found throughout the land to further expand and enhance combat options. Players can also summon spirits they find on their journey to fight alongside them to help even the odds against tougher foes.

ELDEN RING weaves FromSoftware’s critically acclaimed level design and unique storytelling expertise with a handcrafted overworld filled with exciting and mysterious content players can uncover by exploring the diverse world either on foot or riding Torrent, the Spectral Steed. There is always something exciting or unexpected to find behind every corner of this vast world.

ELDEN RING features both cooperative and competitive multiplayer modes. Summoned players can help each other tackle tough enemy encounters or explore the world together. Players can also invade other people’s worlds in the game’s completive multiplayer mode. It’s kill or be killed as the invader tries to defeat other players for valuable rewards.

Be sure to check out exclusive ELDEN RING apparel launching today from Cloak at https://cloakbrand.com

ELDEN RING is rated “M” for Mature by the ESRB. The game is available now in the Americas for the PlayStation®5, PlayStation®4, Xbox Series X|S, Xbox One, and PC via STEAM®. For more information regarding ELDEN RING, please visit https://www.eldenring.com or join the conversation on Twitter at: https://www.twitter.com/EldenRing. To find out more about BANDAI NAMCO Entertainment America’s other products, please visit https://www.bandainamcoent.com or follow us on Facebook at https://www.facebook.com/BandaiNamcoUS or join the conversation on Twitter at https://www.twitter.com/BandaiNamcoUS.