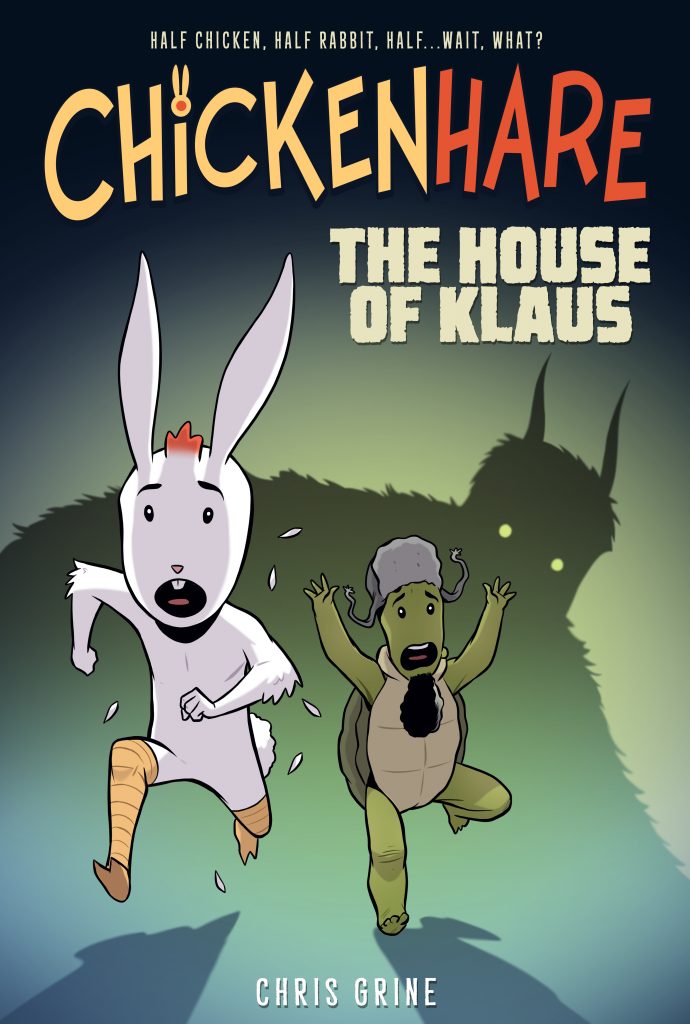 In celebration of the forthcoming animated feature film, Chickenhare and the Hamster of Darkness from nWave Studios, Th3rd World Studios is proud to announce Chickenhare: The House of Klaus, by Eisner nominated creator Chris Grine (Animorphs)!

What’s a chickenhare, you ask? A cross between a chicken and a rabbit, of course. When Chickenhare and his bearded turtle friend Abe find themselves captured and sold to the evil taxidermist Klaus, they have to find a way to escape before Klaus (Rhymes with house) turns them into stuffed animals. With the help of two other strange creatures, Banjo and Meg, they might stand a chance. But with Klaus and his band of henchmen hot on their trail, the adventure is only just beginning for this unlikely group of friends.

“Fun, witty characters and sharp drawings bring Chickenhare to life, but something dark lurks just beneath the surface. A mysterious and whimsical adventure that quickly leads us down the rabbit hole… ” —Jeff Smith, BONE

“I loved Chickenhare. Chris Grine has a delightfully deranged imagination, and he knows how to tell one heck of a good story.” —Stan Saki, Usagi Yojimbo

“Chickenhare is such a fun and funny book it almost makes me mad at Chris Grine for coming up with it first.” —Skottie Young, Deadpool

“It’s just in time for the new animated movie!” said Chris Grine. “I feel so lucky to have my series brought to life by this awesome team and I can’t wait for people, who might not read graphic novels, to get swept up in Chickenhare‘s wild world and see all the awesome things we have coming in the future with my friends at Th3rd World.”

“The unique mixture of humor and adventure was a huge hit and it left my daughter and I both wanting more,” said Michael DeVito, Publisher & Creative Director of Th3rd World Studios. “When Chris mentioned that there was a possibility of us publishing the book we immediately jumped at the opportunity. The book has been out of print for far too long and we’re excited to be able to introduce this whacky series to a whole new generation of readers.”