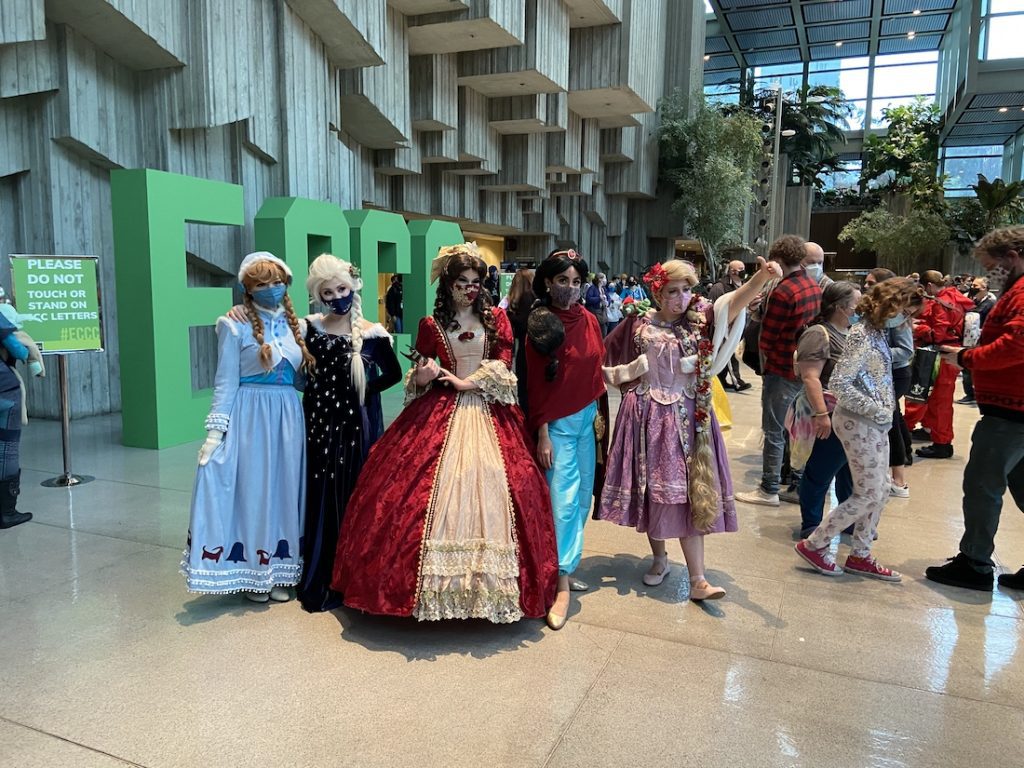 ECCC 2021: Return to the Emerald City

For the first time since March of 2020, The Washington Convention center opened its doors for the annual Emerald City Comic Con. We all know the situation over the past couple of years, so we won’t dwell on that, but this was a big deal for fans and families looking to escape the real world for a bit. To be around like-minded people and fans of things that you love is often the best escape you can get, and this year, you could feel the excitement in the air. For a couple of days, everything felt like it was back to normal, and it was time to be yourself and let your nerdom flag fly.

Many expected it to be a scaled-down version of the Con for the times we live in, but it didn’t seem like it. Walking through the different floors filled with artists of all kinds felt like every other year, like nothing had changed. With the exception of everybody wearing a mask, it was business as usual, and the vendors were out in full force. There was so much to explore and discover on the main floor alone, let alone the upper floor, which housed more artists and writers of some of your favorite comics.

Music blared when you first entered the main floor, and the Funko booth was in full effect. This was a lottery-style event where you could pick up exclusive Funko Pops! and other merchandise that was only sold at the Convention. This set the mood for the whole event; it felt like a party, and everyone was invited. Past the Funko booth was a massive selection of collectibles, toys, clothing, housewares, and fantastic artwork. There was an ECCC Homegrown Section, which showcased artists from the beautiful Pacific Northwest. On this floor, you could find anything you were looking for. You want a homemade sword? They had that. A lightsaber? There you go. You want some cool and unique arts and crafts? It’s all there.

A little bit past that and through the skybridge were Quirk Books, best known for their kid books based on classic movies (HOME ALONE, ELF) and the home of author Grady Hendrix (WE SOLD OUR SOULS, THE SOUTHERN BOOK CLUB’S GUIDE TO SLAYING VAMPIRES). Oni Press (SCOTT PILGRIM VS. THE WORLD) also had a huge presence here, with their recognizable booth that is hard to miss. There was also some great Anime themed backdrops that you could stop and get your picture with, as well as a Figpin booth. Across the bridge was full of artists and comic book guests. Plenty of people to talk to with Source Point Press set up here as well as Stranger Comics. As soon as you crossed the bridge, there was a marketplace full of fantastic artwork to spend your hard-earned cash on.

Upstairs was where the Artist’s Alley was set up. It was here where you could meet and chat with your favorite artists and writers. If you decide to visit Emerald City Comic Con, be warned, there is a lot of stuff to choose from. It will be easy to break the bank and fill your bag with many goodies, and Artis’s Alley is where this will most likely happen. It is ideal to have at least two days at the Con so that you have the opportunity to see everything available. On this floor was also the PC and Console gaming section, where you could play competitive games like Smash Brothers and Halo or single-player games like Spider-Man. The Pop Asia area was also on this floor, educating guests on the arts and culture of places like Japan and South Korea.

Now let’s talk about panels and special stages. There is something for every fandom at Comic-Con, and this year was no different. They had Kung Fu lessons, a kids cosplay competition, and lightsaber training at the family HQ section. There were panels surrounding cosplay and the like also. The Main Stage was located a couple of blocks away at the Grand Sheraton Hotel, and it featured a great lineup of panels. The Voices of Star Wars, where voice actors like Dee-Bradley Baker and Steve Blum discussed voicing characters from Star Wars animated series. There was also a My Hero Academia cast Q + A, featuring the show’s voice cast. The McElroys, a family of podcasters, hosted a panel and the Cosplay Central Crown Championships of Cosplay. One of my favorite events here was the 8-Bit Wave: Video Game And Anime Concert. They are an eight-member ensemble consisting of different Woodwinds, French Horn, Upright and Electric Bass, Keyboard, and Drums. They played a selection of themes from video games and anime while showing edited together clips on a big screen near the stage. It was so much fun and an excellent experience.

Cosplay, art, panels, and concerts were the name of the game this year at the show. Such an incredible event, and it was an honor to be there this year. Walking through the halls, I felt safe and didn’t want to leave.

I look forward to checking it out again next year!