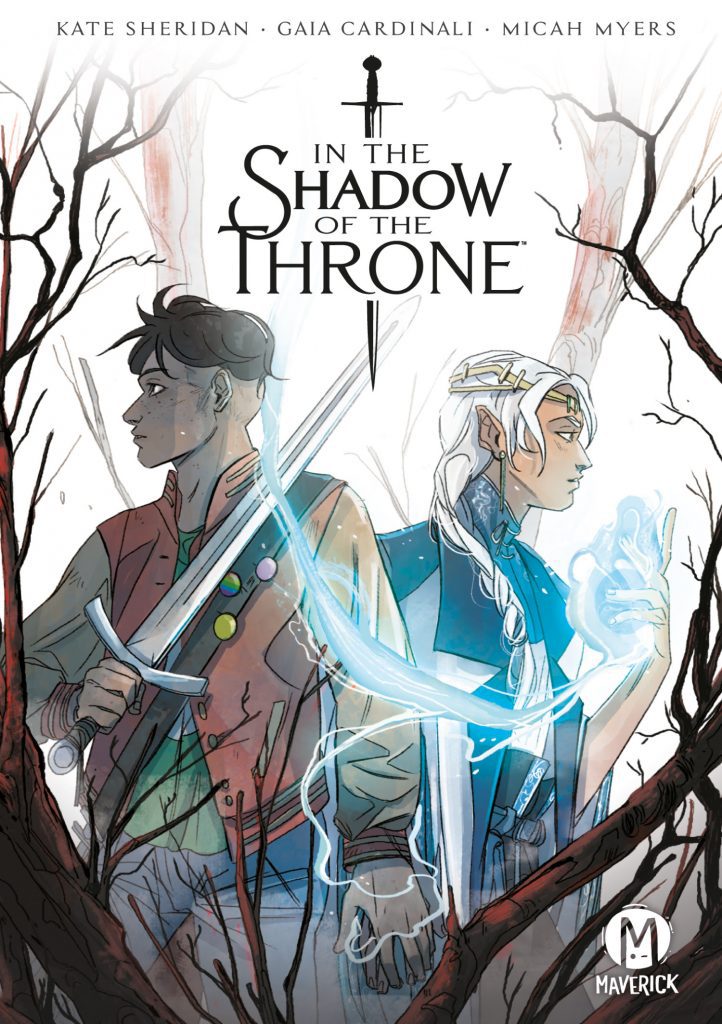 Announcing an all-new OGN from Kate Sheridan: IN THE SHADOW OF THE THRONE

Mad Cave Studios and its YA imprint, Maverick, is proud to announce an all-new graphic novel, In the Shadow of the Throne! Join writer Kate Sheridan (Flash Gordon, Adventure Time: Fionna & Cake) and artist Gaia Cardinali (Disney Mulan’s Adventure Journal: The Palace of Secrets) on Jordan’s epic fantasy adventure that’ll test how much he really wants to get back home.

When his younger siblings and parents begin to irritate him on vacation, Jordan tries to get some space. But instead of wandering around the museum, he finds himself dropped in a fantasy world of magic where he can finally have some fun and train to become a knight. Except Prince Astel and Sir Griffith are about to uncover a sinister secret kept hidden by the Queen that’ll thrust Jordan in the middle of a magical battle he never could have anticipated.

Jordan Rivera needs some time to destress while on a family vacation. When he wanders off in a museum looking for just that, he finds himself much farther away from his group than he planned to be. In the Shadow of the Throne will take readers to a foreign land along with Jordan where anything is possible.

“As a queer kid who had dreamed of running away to a fantasy world and finding drama, danger, magic, and romance, In the Shadow of the Throne has a special place in my heart!” said writer, Kate Sheridan (They/She). “I wanted to tell the kind of story that I wanted when I was that age, and I hope it resonates with teens today. I’m truly blown away by how Gaia has brought our story to life, and so grateful to her, Mike, and the Mad Cave team for making this book with me and giving it a home.”

“In the Shadow of the Throne is a graphic novel I would have dreamed of reading when I was a teenager and now I can say I was part of the team that created it,” said artist Gaia Cardinali (She/Her). “I loved drawing Astiel and Jordan and loved seeing them grow. I grew as well thanks to their adventure. It has been wonderful getting to walk with them in that world full of hope and magic. A big thank you to Kate, Mike and the Mad Cave team who made all of this possible.”

In the Shadow of the Throne will be released August 2022.  Letters by Micah Myers, edited by Michael Moccio. The graphic novel can be purchased on the Mad Cave Studios website as well as Comixology, and Drive-thru comics.

Nolan Smith
0
Tags :
Announcing an all-new OGN from Kate Sheridan: IN THE SHADOW OF THE THRONE