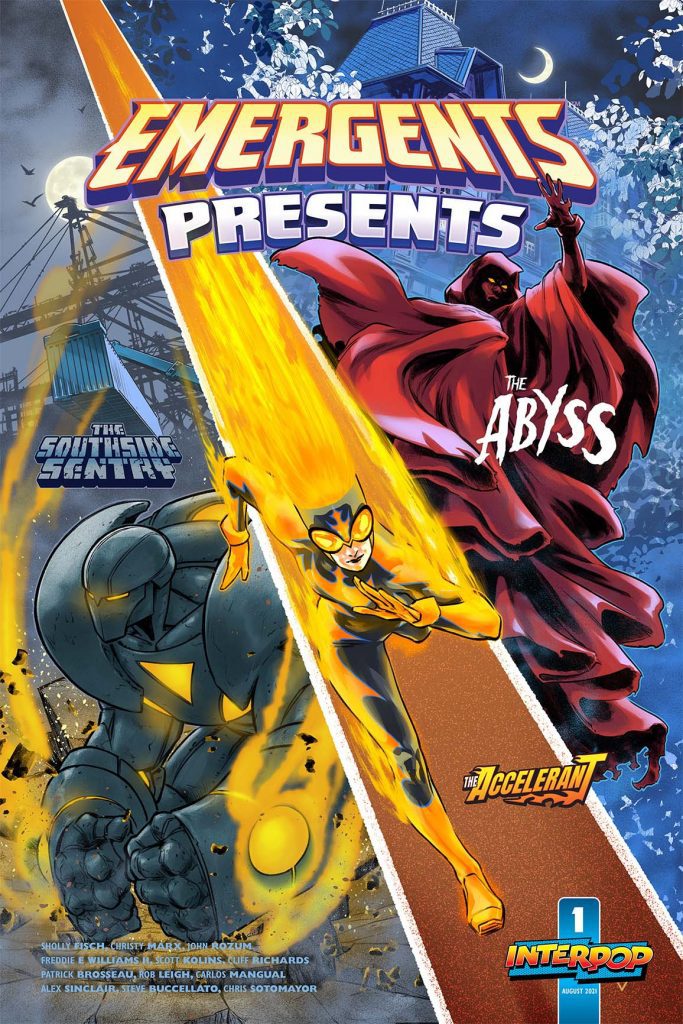 GlobalComix is excited to announce a partnership with InterPop, the Web3-based digital entertainment company, to present readers with the first issues of its Emergents Universe comic series including The Nine, Emergents Presents, #ZoeMG, The Rejects, and The Abyss!

InterPop originally launched the first five comic book series on its platform InterPop Comics this year, creating a brand new superhero universe. Now GlobalComix readers and anyone interested can easily jump into the action and learn about InterPop’s superpowered world, with the first issues of each series now available to read for free.

“Getting to see the Emergents Universe reveal itself over the past year has been nothing short of amazing,” said InterPop President and Publisher, Brian David-Marshall. “Our Executive Editor Rachel Gluckstern has assembled a team of comic book stalwarts and rising stars of the industry to tell superhero stories that embrace technology and give our fans a voice. Now, as we seek to share the fruits of those labors with an even wider audience we are thrilled to be partnering with GlobalComix and showcasing our talent and our heroes for a worldwide audience.”

“InterPop exists at the intersection of comics and technology, so naturally we were drawn in from the beginning,” said Eric Tapper, GlobalComix Head of Business Development. “In the comics world they’re creating an exciting new world of comics that already feel classic. In the tech world they’re giving fans both on-ramps to participate in a new kind of ecosystem, and the ability to help define it. We’re thrilled that they’re sharing their #1s for free with GlobalComix readers to help build bridges and achieve the vision of a more connected comics community.”

The Nine #0 first introduced readers to the The Emergents Universe, centered in the city of Culverton, a superpowered society. Readers can follow the Crime Blotter as he investigates the cold case behind the disappearance of the villain Phaeton. The series is written by superstar scribe Will Pfeifer (Teen Titans, Batman) and drawn by award-winning illustrator Steve Ellis (High Moon).

Emergents Presents #1 marks the debut of InterPop’s anthology series, with each issue featuring three short stories showcasing three different characters from The Emergents Universe; fan votes by purchasers of the issues decide which favorite character reappears in the series. Creators of the series include Colleen Doran (The Sandman), Marc Andreyko (What Is It That Disturbs You, Stephen?), Brian Buccellato (The Flash), Alex Sinclair (Venom), Eric Anthony Glover (The CW’s Tom Swift), Juan Doe (Guardians of the Galaxy), and many more.

#ZoeMG #1 introduces readers to Culverton’s #1 internet influencer, Zoe Ng. Learn how teen superhero Zoe discovers her emoji-centric mind powers and how she deals with the responsibilities that inevitably come with them. The series is authored by New York Times-bestselling writer Danielle Paige (Dorothy Must Die), and illustrated by rising star artist PJ Kaiowá.

The Rejects #1 spins off from #ZoeMG, following a group of superpowered teen outcasts who gang up together to navigate their abilities amidst battles with a rival group. The series is co-written by acclaimed creator Alex Segura (Secret Identity) and Chantelle Aimée Osman (editor of Agora Books) in her comic writing debut, with art by Adrián Gutiérrez (DC’s current Blue Beetle series).

The Abyss #1 continues the story of the popular Emergents Presents character who was chosen by the fans to appear again and again in the anthology series. The exciting first solo issue follows the Abyss while they thwart a high-stakes prison breakout. Can the Abyss measure up against the Hat’s superpowered henchmen? The series is written by John Rozum (Xombi) and illustrated by artist Cliff Richards (Buffy the Vampire Slayer).

All titles are available to read on the site for free on the GlobalComix Website.