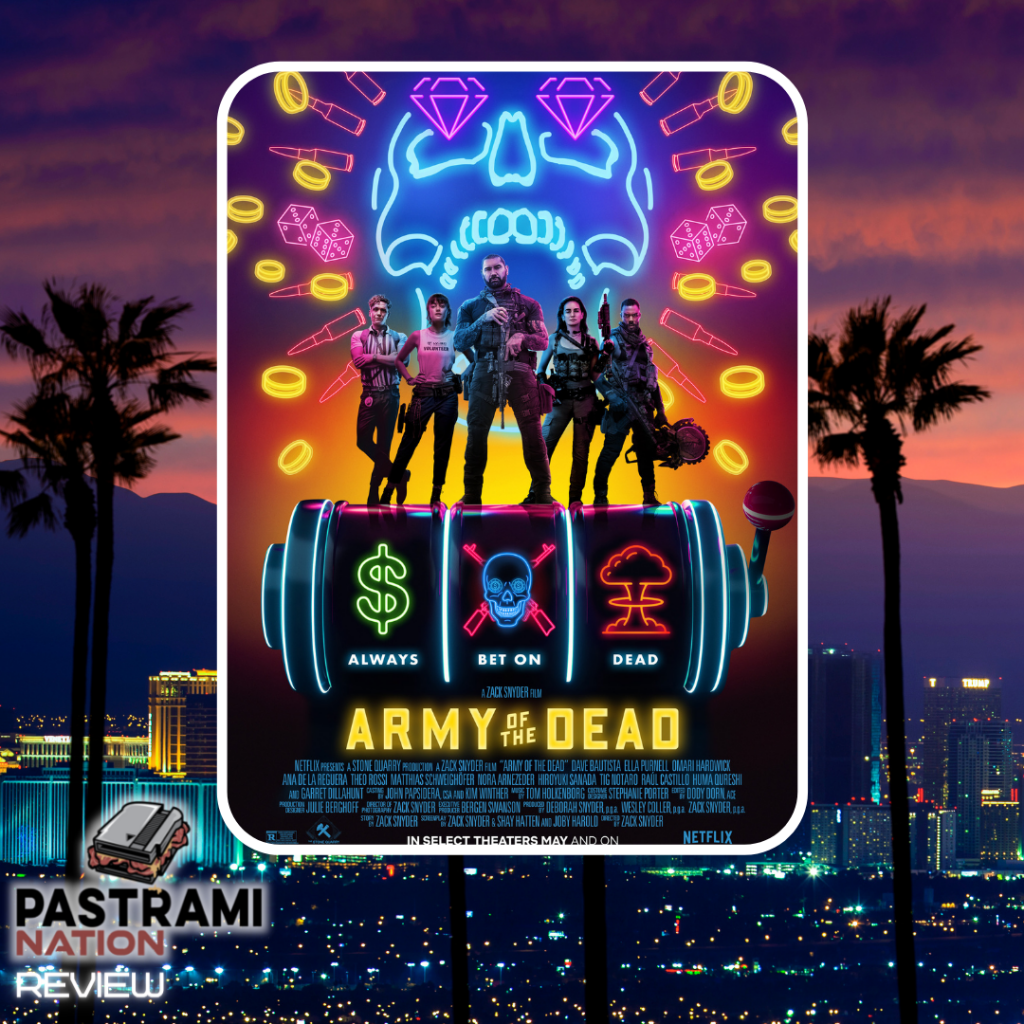 Army Of The Dead Review

After playing within the confines of the DC universe of films, director Zack Snyder is back with his first original film in years. With the Netflix original film Army Of The Dead, he returns to the zombie genre that launched his film career so many years ago. His first movie was a remake of George Romero’s Dawn Of The Dead, and it was met with acclaim from critics and audiences alike. Although this movie sounds like a continuation of that series with its title and subject matter, it is in no way related to the franchise but is just as bloody and entertaining.

The whole idea of the movie sounds bonkers, but it totally works. After a zombie outbreak hits Las Vegas, the city is barricaded and turned into a quarantine zone. A rag-tag group of mercenaries is hired to steal money from a vault located in a casino on the strip before nukes completely level it. There is a lot of stuff going on in the movie, and it’s a clever mix of Ocean’s 11 and Snyder’s own Dawn film.

The cast is led by Dave Bautista, who plays the leader of the group Mark Ward. He’s seen some stuff in the years since the outbreak and is one of the most interesting characters in the movie. He is trying to do the right thing for his daughter Kate (Ella Purnell) and allows her to come along. She has ulterior motives of her own while inside the quarantine zone, and their relationship is complicated. While there are many human characters in the movie, they are the heart and soul of it, and they both absolutely sell it.

The whole cast has amazing chemistry and are so much fun together. Hiroyuki Sanada is having a heck of a year, playing Scorpion in Mortal Kombat and the benefactor of the mercenary group in this film. The late-stage replacement of Chris D’elia (that’s a whole other story) with Tig Notaro was a genius decision, and Garrett Dillahunt is perfectly evil. Huma Qureshi, Omari Hardwick and Matthias Schweighöfer round out the human cast.

Now, let’s talk about the zombies. These aren’t the types of zombies you are used to seeing on screen. (Very minor spoilers the next couple sentences) These are smarter and more organized this time around. Within the barricade walls, they have created their own societal structure, with leaders and underlings. It’s an interesting twist to the genre and made the movie click differently. Oh, and there are zombie animals, too, which was really cool to see.

Much like the setting of the movie, Snyder knows how to put on a show. Everything from the opening credits to the action sequences are filled with his trademark style. He has so much energy and somehow manages to focus the action even when things are super chaotic. It’s a bit on the long side, but if you are a fan of his and want to watch a great cast brutally take down some zombies, it’s worth the watch.