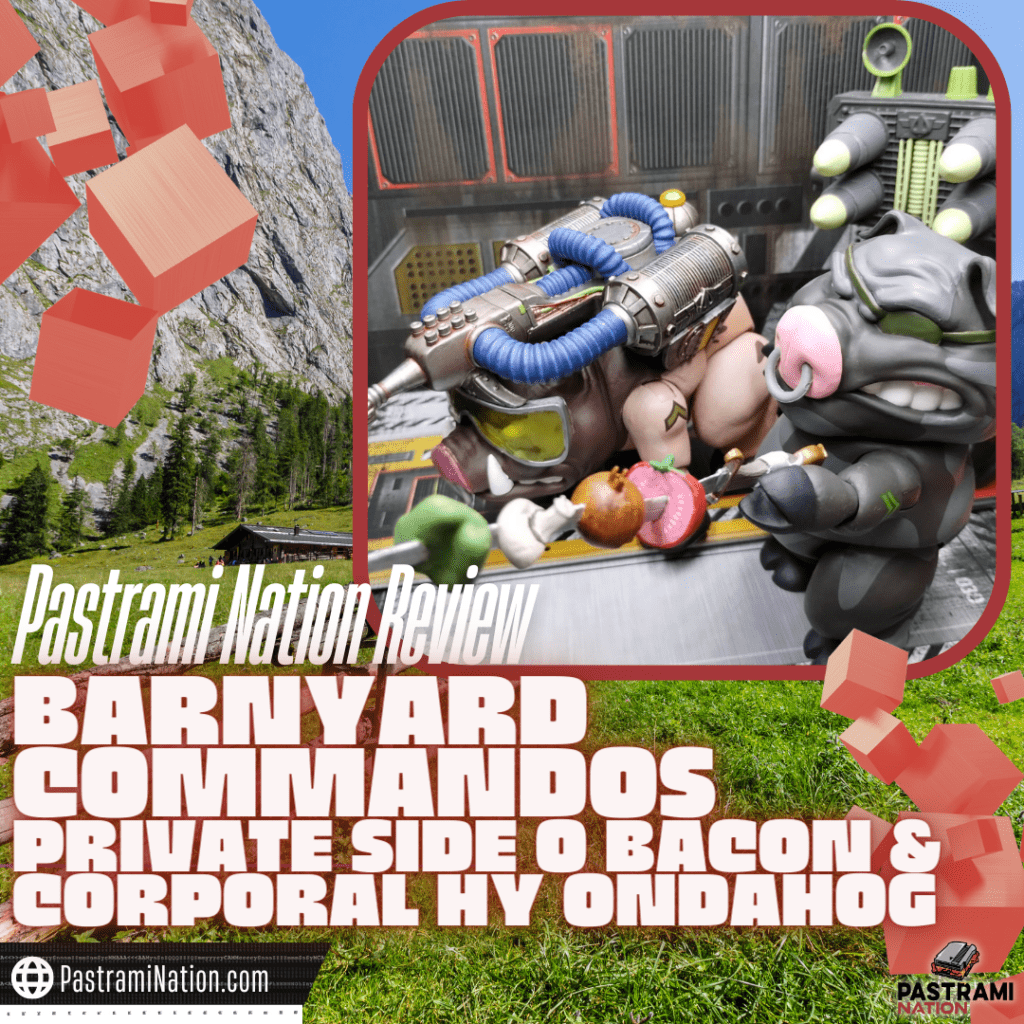 The ’80s and ’90s were a great time to be a toy collector. We had it all back then. Transformers, Ninja Turtles, G.I. Joe, you name it, we had it. Well, “we,” being most kids who weren’t as tight on money as me. But some really excellent, more in my price range kind of figures came to my rescue. Those toys were Food Fighters and the even cooler Barnyard Commandos, which were made up of 2 factions of farm animals, pigs, and sheep, or should I say P.O.R.K.S. and R.A.M.S., complete with insane military weaponry. They were such awesome toys. Now fast forward to 2023, and they’re back bigger and better than ever, thanks to the good folks at Premium DNA and Cloudco Entertainment.

These incredible people were kind enough to give us some hands-on figures to review, so I had to start with the P.O.R.K.S. since I remember the first Barnyard Commando I had was a pig. A pig that was soft squeezy with no articulation, which is certainly not the case with these guys.

I started with Private Side O Bacon, a large, fully articulated pig on all fours, complete with a huge flamethrower that mounts on his back, interchangeable face shields, and a bale of hay for cover. Overall, the Private was pretty awesome, but the other P.O.R.K. I got my hands on blows him out of the farm.

The Stealth Ops versions are an excellent variant Premium DNA created for each figure, as they are given dark “stealth” paint jobs with glow-in-the-dark weapons. I have Corporal Hy Ondahog, a P.O.R.K. leader standing upright on two legs with a rocket launcher that he can stand on as well as land mines, interchangeable hooves and my favorite weapon of his, his saber that has pieces of food skewered through it. And did I mention articulation? The corporal here has way better poseability options than his four-legged comrade because he stands on two legs. It gives him more options than Side O Bacon, who is somewhat limited cause, you know, all fours.

Premium DNA has hit a home run by bringing back one of my childhood favorites, and I can’t wait to dive into the R.A.M.S. next and then decide which faction wins. If you’re a fan of Barnyard Commandos like myself, then your going to want to pick these up. It’s like updating your childhood memories to fit today’s action figure world!

Private Side O Bacon: FOUR Pastrami Nations out of FIVE