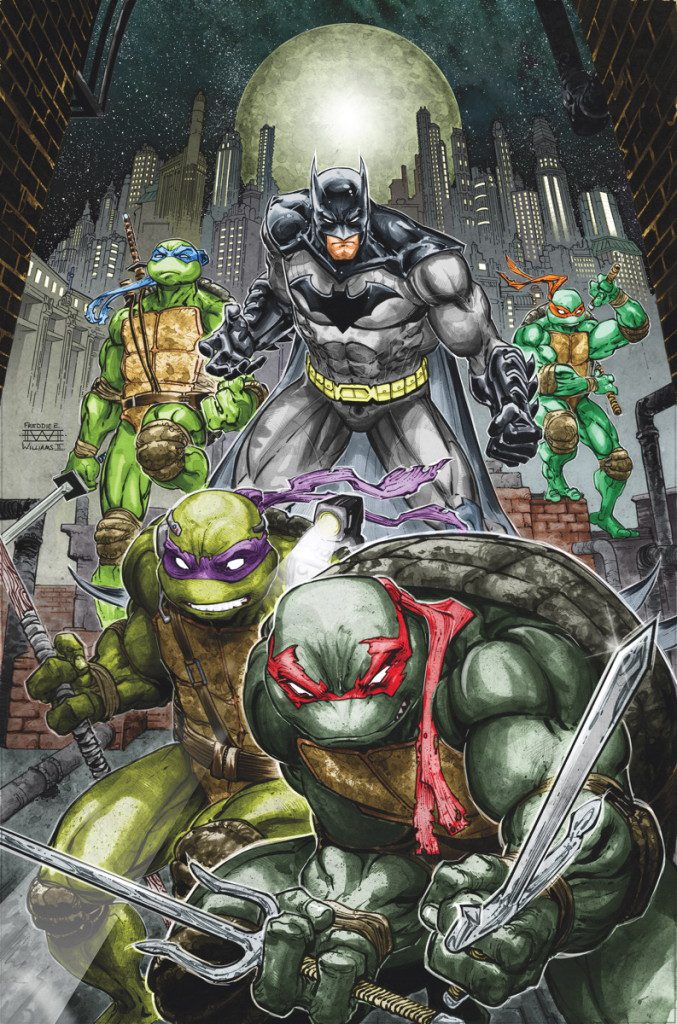 (Victor Valley)—It’s the team up fans never expected: the Dark Knight of Gotham, the Heroes in a Half Shell- two iconic properties that both run in the same circles when you think about it. Both are protectors of their cities, both fight crime in the shadows- but to think we would ever get a meeting between the Teenage Mutant Ninja Turtles and Batman, that is something fan boys speculate about. Well, it has happened- due to a partnership between DC Comics and IDW Publishing, we get to see this titanic meeting, and if issue one is any indication, then this is going to be a great collaboration.

Written by James T. Tynion IV, who is no stranger to the Batman with his work on Batman Eternal among a plethora of Bat-titles, and art by one of my favorite artists, Freddie E. Williams II (Robin), this issue introduces us to the situation at hand, as well as our heroes on both sides of the fence. In Gotham, it’s the anniversary of Bruce’s parents’ death, always a somber occasion. Luckily, Batman is busy trying to figure out a sudden new threat in his city- one with the M.O. of a ninja. For our four turtle brothers, they come across an intruder in the lair- one that happens to be classic Batman villain Killer Croc. How is this possible?

Tynion creates an amazing first issue- both worlds felt completely in tune- from Bruce’s detective work and conversation with his trusty mentor Alfred, to the turtles casual conversations and witty punch lines. Williams II’s artwork is a great fit for this, which is no surprise, given his background with DC’s toolbox of characters. The Foot, Killer Croc, Shredder- it was amazing to see these characters all intertwined in one book.

This could have been a lackluster idea if executed poorly- thankfully, this issue is anything but lackluster. This first issue is a great start to the mini series, putting all the players on the chessboard. I felt like a kid seeing my cartoon heroes meet in a once in a lifetime opportunity- tell me that isn’t the best feeling to walk away with?