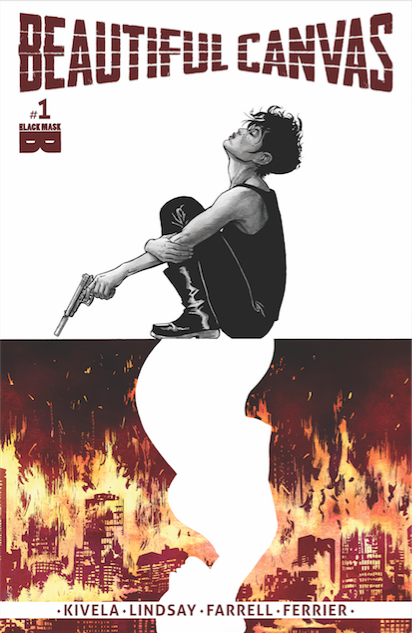 It’s no secret: I have been a fan of Black Mask Studio since their inception. From Space Riders to We Can Never Go Home, Black Mask has created a number of astounding and creative titles. With their latest title, Beautiful Canvas, we get a book that lets the good times roll as blood spills from the opening page.

The book opens with one of the best opening scenes in a comic this year: we see a woman with a gun, and a dead man on the couch with a bullet in his head. The corpse, while looking at the woman, says “You’re overthinking it.” This is how this crazy, violence filled series opens- with a talking corpse. Our protagonist, the same woman from the opening scene, is Lon Eisley, a hit woman hired to kill a child. But she isn’t thinking straight as it is, as her girlfriend just told her she is pregnant. We see the hit go south with a deadly showdown, which leads the kid going into Lon’s protection. That’s good, because protection is needed when a band of mutants is dispatched to take out Lon and the child, with a twist of an ending.

Writer Ryan K. Lindsay, artist Sami Kivela, colorists Triona Farrell, Louise Fitzpatrick and Alberto Hernandez, with letters by Ryan Ferrier have created a very special first issue. The book is beautiful, colorful, and strangely entrancing. There is more going on with Lon than we initially see, as she sees visions or flashbacks of some pretty messed up stuff, so we know this heroine is more than meets the eye. Why did someone want the kid killed? What turned Lon into a death dealer for a living? So many questions, and with issue #2, I can’t wait to see what is answered.

Black Mask has a violent hit on their hands with Beautiful Canvas. A strong female lead, a story that is guaranteed to bring the pain, and hybrid mutant hitmen: what more could you want? Beautiful Canvas is an amazing debut issue, one you should be checking out. But keep in mind, this is for mature readers, so keep out of reach of the little ones.