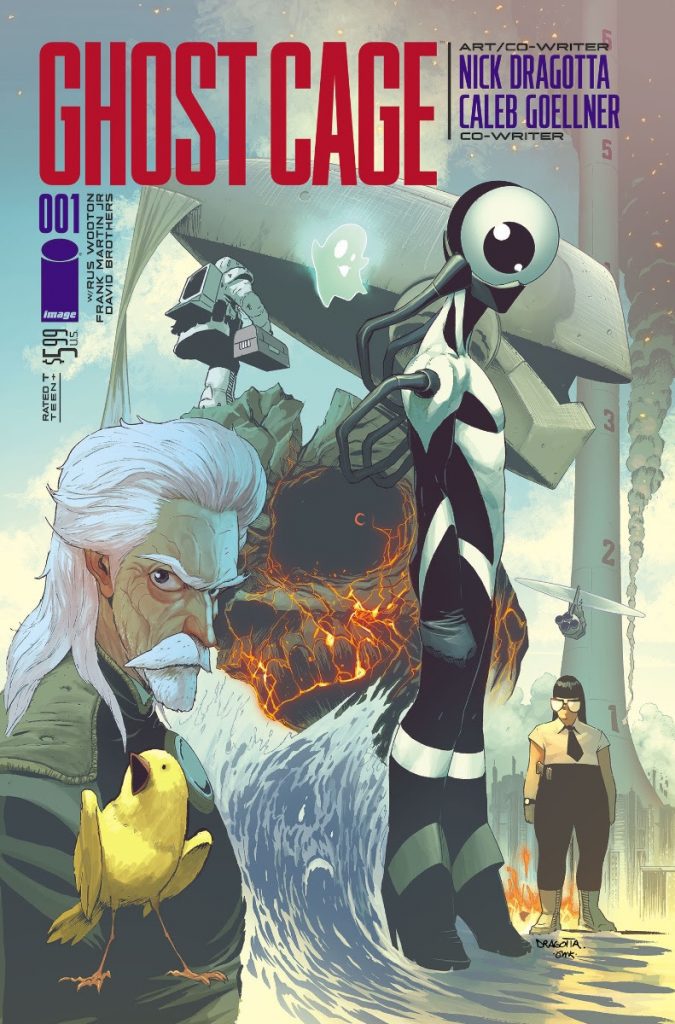 Bestselling East of West artist Nick Dragotta teams with rising star Caleb Goellner (Teenage Mutant Ninja Turtles: New Animated Adventures) for an all-new, sci-fi adventure in Ghost Cage. Rus Wooten will also lend his design and lettering talents to the series, Frank Martin Jr. will re-team with Dragotta on covers, and David Brothers will provide expert insights as editor on the title. This three, extra-length, issue miniseries is set to launch from Image Comics in March 2022.

In Ghost Cage, when his megacorp power plant falls under attack by terrorists, the super-scientist who revolutionized and controls all energy on Earth sends his ultimate creation (and an adequate employee) in to destroy his most monstrous secrets.

“Finishing up East of West, I felt ready to start writing and drawing my own comics. Caleb Goellner agreed to co-write with me, and we cooked up Ghost Cage. We set out to make something that feels immediate, urgent, so it’s in screen-toned black and white, hot off the drawing board. We wanted to let the story breathe, so we went with 44-page issues. And lastly, we wanted to tell a story that will make us examine the things we sacrifice on a daily basis, the bits of us that we give up to survive,” said Dragotta. “I love drawing characters that are up against all odds. One character Doyle in particular, her greatest strength is her heart, and SAM, our ultimate weapon, is going to learn all about that from her. I’m trying to push the fast-paced action and cool characters I’m known for. If you liked East of West, my art and storytelling from that series, you’ll dig this book. It’s even got a little existential dread and a white tower… Caleb and I are making a book exactly like we want to do it, and all at Image Comics for their 30th Anniversary. Don’t miss it.”

Ghost Cage #1 will be available at comic book shops on Wednesday, March 23.

Ghost Cage #1 will also be available for purchase across many digital platforms, including Amazon Kindle, Apple Books, and Google Play.