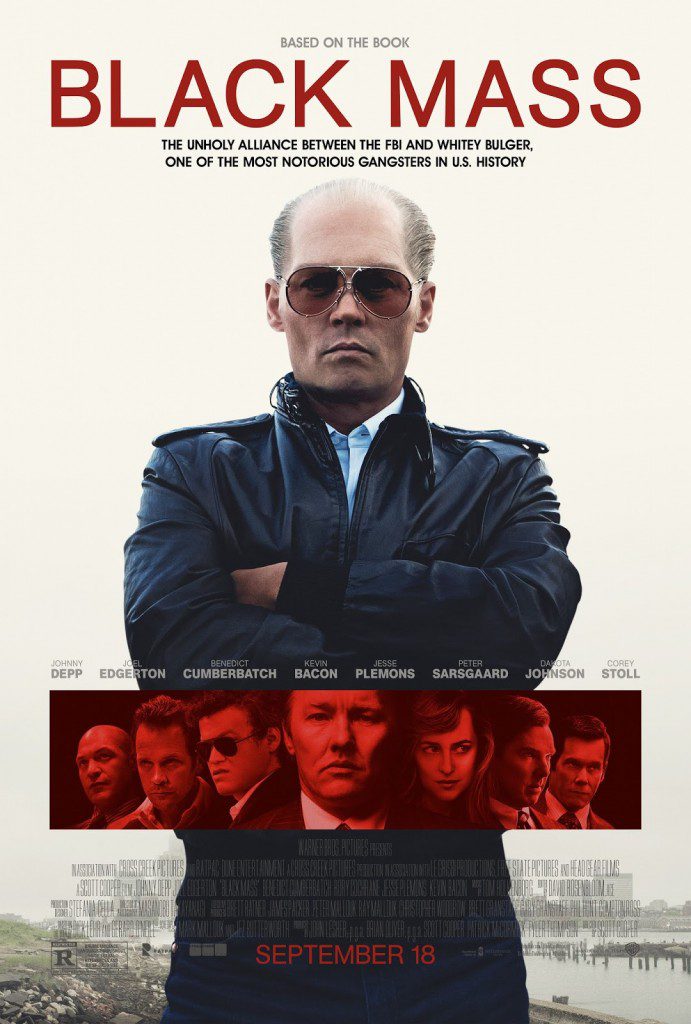 (Victor Valley)—He’s a household name- just about anyone who watches the television knows who James “Whitey” Bulger is. One of the most feared and violent men in current history, Bulger and his men carved their legacy in blood across the streets of South Boston. With Black Mass, we see not only the rise and fall of one of the U.S.’s most infamous criminals, but also the dual story of FBI agent John Connolly.

Johnny Depp brings Whitey Bulger to the big screen, which at first seems like it would be a case of bad casting. But Depp, being the tremendous actor that he is, transforms into Bulger and strikes fear in the theater. The mannerisms, the tension- Depp shines as a man more bent on vengeance and respect than anything else. We see Bulger go from a small time criminal to becoming the name on all of law enforcement’s minds in Boston. But with his rise and fall comes some very personal losses, losses that connect you more and more to Bulger in this flick.

Bulger’s story intertwines with several key individuals, including his brother and Senator, Billy (Benedict Cumberbatch) and FBI agent John Connolly (Joel Edgerton), all three having grown up together in South Boston. We see Connolly go on a rollercoaster himself, changing drastically from the beginning of the film. Cumberbatch delivers a great performance as brother Billy- a man who loves his brother but doesn’t condone any of Whitey’s drastic actions.

Those actions are usually brutal murders, taking place in the broad daylight and involving lots of blood. This, of course for me, is what I expected to see. Bulger was ruthless on the streets, and this film depicts the cold-blooded nature of Bulger perfectly. What some might think would be a generic gangster tale will need to look again, as Black Mass offers more than a throwaway mafia flick. Depp and company deliver great performances across the board, making for a blood-curdling tale that is worth the price of admission.

1 thought on “Black Mass Review: The Face of Fear”