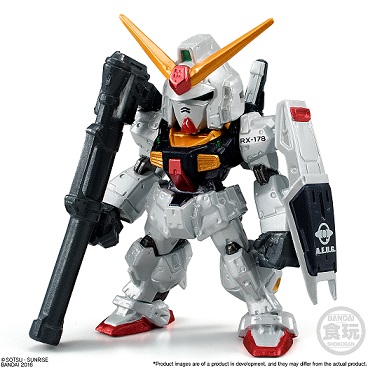 Bluefin, the leading North American distributor of toys, collectibles, and hobby merchandise from Japan, has announced a colorful collection of exclusive products that will be displayed and also available for purchase during the 2016 Anime Expo.

Anime Expo is the largest dedicated anime/manga fan convention in North America and takes place July 1st–4th at the Los Angeles Convention Center in Los Angeles, CA. Tickets and full details are available at: www.anime-expo.org. Bluefin will be located in Booth #1401.

Bluefin will delight Anime Expo attendees with a colorful collection of high quality and in many cases, limited edition or special variant products and high quality model kits for popular properties including Gundam, Dragon Ball, and more.

Dragon Ball fans that purchase a Bandai Scouter headset at the Bluefin booth will receive Super Saiyan Hair that can be placed snugly over the head.

A new breed of action figure model kit that blends high articulation and detailed sculpts together in one package! Super Saiyan Goku is constructed using layered colored plastic techniques that blend the seam lines together with the folds of his outfit and contours of his muscles leading to a natural appearing joint system.  Simple construction patterns ensure it will be an easy to build figure even for those who have never built a model kit before!  Includes different hand parts for various martial arts poses, and 2 types of kamehameha effect parts with stand, and one powering up facial expression!

A new breed of action figure model kit that blends high articulation and detailed sculpts together in one package! Frieza is constructed using layered colored plastic techniques that blend the seam lines together with the contours of his muscles leading to a natural appearing joint system.  Simple construction patterns ensure it will be an easy to build figure even for those who have never built a model kit before!  Includes different hand parts for various signature poses, and 2 types of energy weapon effect parts with stand, and one wicked facial expression!

The Bandai Gundam Thunderbolt kit also will be included as part of an exclusive new Blu-ray bundle set that will be available (MSRP: $120.00) and offered during Anime Expo.

A specially designed tool kit with everything necessary to expertly build your GunPla model. Set includes a metal file, tweezers, a nipper, knife with replacement blades, and a black Gundam marker for panel lining. A must-have for the true GunPla model builder.

This special 3 pack consists of metallic colored versions of the Gundam MK II in AEUG and Titans colors along with G-Defenser that can combine with either figure to create the Super Gundam. It has been made specifically for select regions such as the U.S.!

A special event exclusive RG Wing Zero Ver EW that has been coated in a beautiful pearl gloss finish. Utilizing the Advanced MS Frame that allows armor to be mounted on to a skeletal support structure, this iconic angel winged Gundam from “Gundam Wing Endless Waltz” is capable of performing its signature poses with its Twin Buster Rifle.

The iconic and radical Gundam from the “Gundam Iron-Blooded Orphans” TV anime series in a special clear form which can show off the incredibly detailed Gundam Frame underneath.  Includes parts to recreate Barbatos first and 4th forms and comes with Sword, Mace, Shield Arm, Long Range Cannon, and Mobile Worker. Available only for purchase at special events!  Limit 1 per person.

A translucent version of the RG 00 Raiser from “Gundam 00” in Trans Am colors originally available only in Asia.  Special clear colored plastic allows display of the amazingly detailed Advanced MS Frame with the outer armor on. Includes a number of weapons and accessories including GN Sword III, GN Sword II, beam sabers and O Raiser which can detach from the body of the main Gundam.  Limit 1 per person.

A cute little beargguy colored in Gundam’s iconic mass produced Zaku green! Includes one puzzle piece display stand which can connect to other Petit’gguy models!  Build your growing Beargguy army with one of these limited Petite Bears!  Purchase limited to 2 units per person.

Based in Irvine, CA, Bluefin built its reputation as a leading distributor of Japanese toys, collectibles, novelty and hobby products. In recent years, Bluefin has grown to include a range of high quality collectible lines from the United States, Hong Kong, Taiwan and Singapore and established itself as the official North American consumer products and retail development partner for Studio Ghibli. Selling to thousands of specialty, chain and independent stores, Bluefin is an official North American distributor for Bandai Hobby, Kotobukiya and Capcom, is the sole provider of Bandai Tamashii Nations products, and is also the exclusive and official distributor for Hero Cross, Beast Kingdom, Mr. Hobby, SEN-TI-NEL and X-Plus. Bluefin also represents TruForce Collectibles products worldwide. Additional information is available at: www.bluefincorp.com.