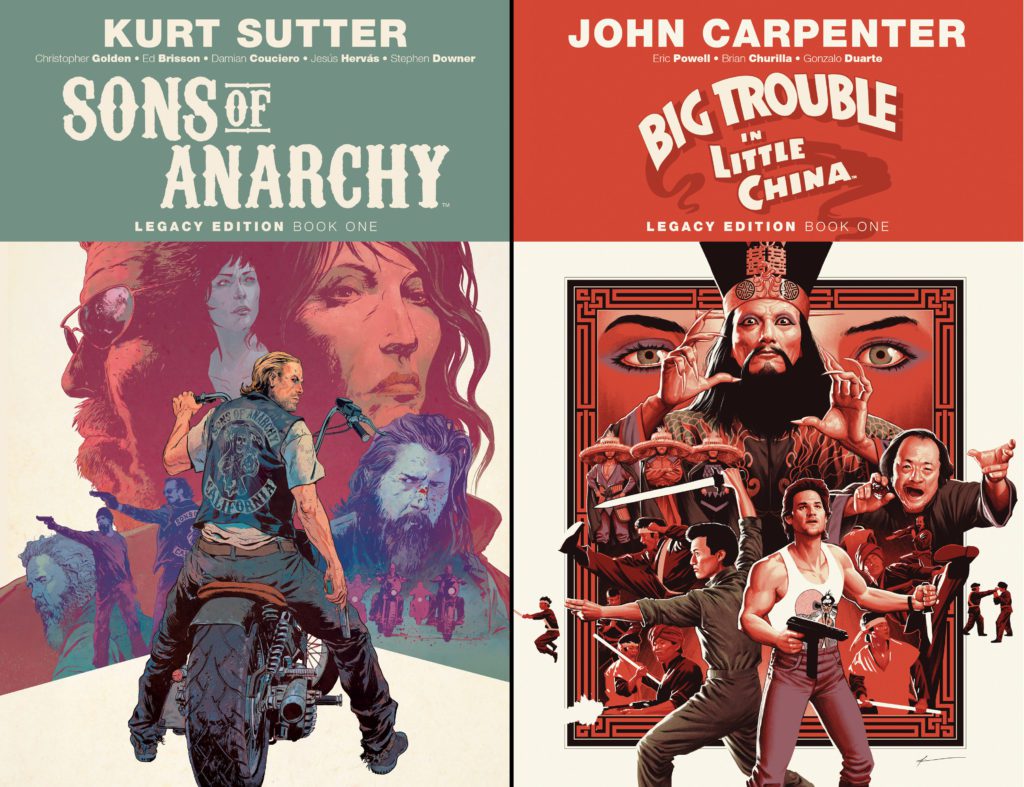 BOOM! Studios today announced the introduction of an all-new LEGACY EDITION softcover format, collecting every issue of the most popular BOOM! Studios series in chronological order and in a newly designed, value priced format for the very first time.

The first LEGACY EDITION softcover collections will arrive in late 2018, beginning with a top-secret, currently unannounced series, and then continue into 2019 with top pop culture franchises including:

Kurt Sutter, the visionary behind Sons of Anarchy, delivers the epic outlaw story of Charming’s most notorious biker gang in this official tie in to the hit television series, collected in this all new format for the first time!

With stories taking place between Seasons 3 and 4, and running parallel to Season 6 of the hit show, writers Christopher Golden (B.P.R.D.) and Ed Brisson (Old Man Logan) and illustrators Damian Couceiro (Iron Fist) and Jesús Hervás (Penny Dreadful) weave tales of SAMCRO attempting to keep the family together, while also staying one step ahead of the law.

Jack Burton, a macho, truck-driving adventurer, finds a stowaway demon hiding on his rig, The Pork Chop Express, but that soon becomes the least of his troubles. He helped his best friend Wang save his fiancée from the clutches of an ancient sorcerer, but now the wedding has been invaded by more evil forces with one thing on their minds—revenge against Jack Burton!

“The new LEGACY EDITION format is an important part of BOOM! Studios continued efforts to bring new readers into the world of comics with value-priced collections that attract readers who might be experiencing comics for the first time,” said Bryce Carlson, VP of Editorial & Creative Strategy. “With true seminal pop culture properties like Sons of Anarchy and Big Trouble in Little China, alongside some top secret franchises you’ll hear about soon, these LEGACY EDITION collections are the perfect place to point the new comic book reader in your life.”

For news on LEGACY EDITION collections and more from BOOM! Studios, stay tuned to www.boom-studios.com and follow @boomstudios on Twitter.