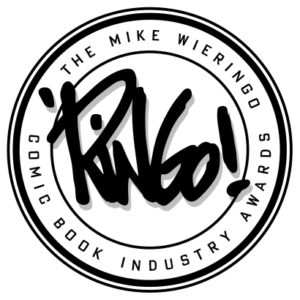 BOOM! Studios is proud to announce that its series and creators have received seven nominations in the 2018 Mike Wieringo Comic Book Industry Awards (commonly referred to as the “Ringo Awards”).

This prestigious list of 2018 Ringo Awards nominations includes the following:

Best Letterer
Colin Bell (including his work on Godshaper)

“BOOM! Studios is proud to see a wide-ranging list of our creators and series nominated by the Ringo Awards this year,“ said Matt Gagnon, Editor-in-Chief, BOOM! Studios. “We’re committed to bringing new voices and new stories to diverse audiences in an effort to continue to grow the industry. Congratulations to everyone nominated in the 2018 Ringo Awards!”

The 2018 Ringo Awards will be presented at the Ringo Awards Banquet and Ceremony in conjunction with the 2018 Baltimore Comic-Con on the evening of Saturday, September 29, 2018.

Voting on the 2018 Ringo Awards Final Ballot is now open, and is restricted to the comic book industry creative community — anyone involved in and credited with creating comics professionally can vote at http://ringoawards.com till August 31, 2018.