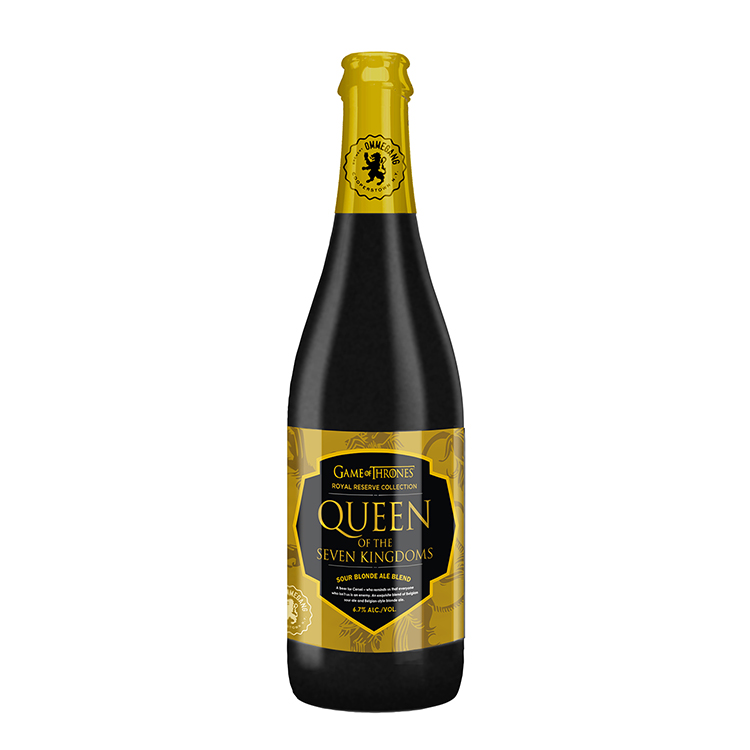 The first beer in Brewery Ommegang and HBO’s Royal Reserve Collection is just hitting stores this month, but the second beer is already on the horizon! Queen of the Seven Kingdoms, the second in a series of four special, limited release beers, each designed and brewed as an homage to one of four epic figures in the battle for the Seven Kingdoms, is brewed and blended for Cersei Lannister.

is a complex character, and we’ve tried to emulate that profile with this beer, which blends a lovely, dry blonde ale with a subtly tart Belgian sour,” says brewery president Doug Campbell.

“When we set out to create the Royal Reserve Collection, we knew we had to pay homage the character currently sitting on the Iron Throne. We’re very happy to present this tribute to the Queen of the Seven Kingdoms herself, Cersei Lannister” said Jeff Peters, Vice President of Global Licensing and Retail, HBO.

Queen of the Seven Kingdoms pours a pale gold color with a brilliant white head. Aromas of melon, citrus, and lactic acidity meld together with fruity esters from the Belgian yeast. Tart citrus flavors soften to sweet malt flavors with notes of apricots. The finish is dry and crisp with a subtle citrus bite from the lemon peel. Queen of the Seven Kingdoms pairs well with sharp aged cheeses and salty cured meats, red meat or dark poultry, and spiced desserts like pumpkin pie or apple tarts.

The Royal Reserve Collection features four brand new beers in the brewery’s Game of Thrones-inspired series with HBO. All of the beers will be available on draft and in 750ml bottles. The series begins with Hand of the Queen, a barleywine, which launches in April, then Queen of the Seven Kingdoms, followed by two additional beers that launch in October and December 2018. Details and images of future beers will be announced throughout the year.