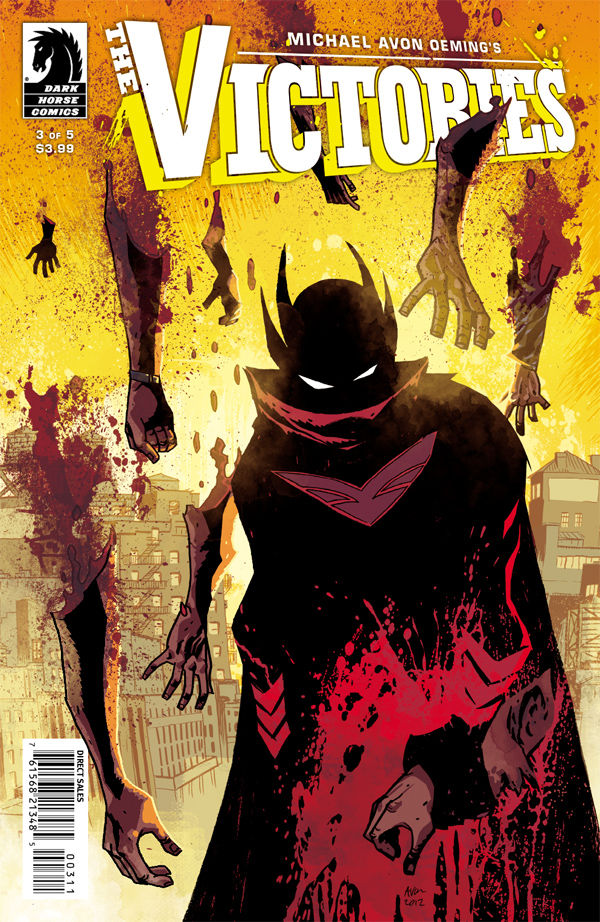 I have been saying it all year: Michael Avon Oeming’s The Victories was going to be HUGE! I mean, look at what Oeming has done already: Powers, Hammer of the Gods, Bastard Samurai to name only a few (all of which are great if you haven’t checked them out), and now The Victories. Issues 1-2 set the backdrop all while keeping the action and violence cranked, so how does the third issue fair?

This issue tops the other two in regards to story and character development, though I am partial to the first issue… that Jackal is crazy. This issue focuses on anti hero Faustus mainly, and what exactly went on in that head to make the “hero” of now. We see Faustus as a child, along with his former friend and ally, Strike. Strike has seen better days in the present, which leads Faustus and the Victories to find their once trusted teammate. Also in the book, we see a threat in a different way: the dangerous drug known as Float. What does it do? Trust it’s name, and you’ll get the picture.

Oeming once again delivers on all levels, as the dark and brooding world of Faustus and the Victories feels more dangerous than ever. This is the turning point of the series, as the dark secret that Faustus holds begins to surface in more places than one. The great thing about Faustus are the tragic flaws he possess, making him seem more like us than most other heroes. I think that this is some of Oeming’s finest work, and will go down as one of the best titles Dark Horse Comics has ever produced. When you look at the impressive library of titles Dark Horse has, you can see that is saying a whole lot. Highly recommended, I give The Victories #3 a perfect @@@@@ out of FIVE.