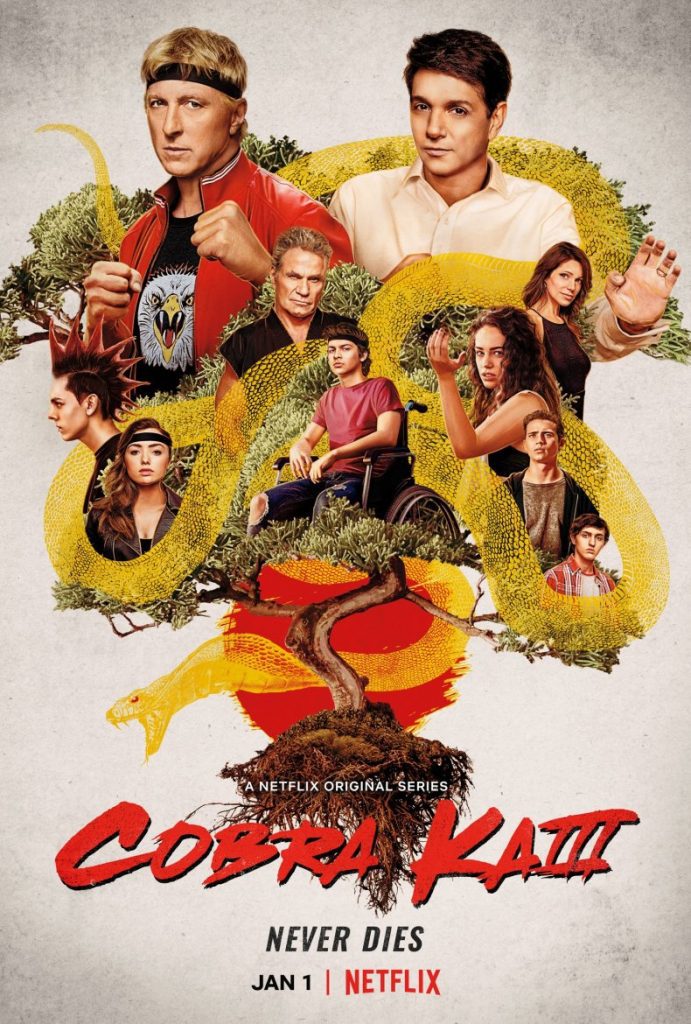 The stakes are higher, and the rivalry between Cobra Kai and Miyagi Do heats up in season 3 of Cobra Kai. All episodes are now available to stream on Netflix. There will be no spoilers for the third season, but there will be some spoilers for those if you haven’t seen the previous two.

For those of you who don’t know, the show is a continuation of the Karate Kid films. Set 34 years after the original film’s events, it tells it’s narrative from Johnny Lawrence’s (William Zabka) point of view. When he decides to reopen Cobra Kai, it rekindles his rivalry with Daniel LaRusso (Ralph Macchio). When Daniel opens his own dojo, Miyagi Do, things intensify, and it becomes an all-out war between the two.

Season three starts with everybody picking up the pieces of the massive brawl at the end of season two. It has torn the community apart and has created an even bigger wedge between Cobra Kai and Miyagi Do. Dealing with the guilt of “going soft,” Johnny blames himself for landing Miguel (Xolo Maridueña) in the hospital. Losing his dojo to his former sensei, everything is falling apart around him. The LaRusso’s are also on the verge of losing their car dealership due to the fight’s publicity. Things are a complete mess, and the only way to fix it might be to put their differences aside and work together.

Created for television by Josh Heald, Jon Hurwitz, and Hayden Schlossberg, this season is far more emotionally driven than what came before. It’s fair to say that it also relies heavily on nostalgia, but it’s done in a way that never feels forced or used as a crutch. It uses the past to build on the future in a unique way, one that is rarely seen in most modern-day reboots of old properties. Characters from the past don’t just show up to be seen; the plot and the story move ahead because of them and the lessons learned. It’s completely earned at this point in the series, and it’s a fun trip down memory lane.

The series’s character dynamics are excellent, and this new season continues to build them in a cool way. The rivalry between Daniel and Johnny is one thing, but then all these other pieces come into play. It’s not just their egos going against each other; it’s the kids from their dojo’s that often pay the price for the actions of these two men. They get caught up in the middle of everything, they bring on most of it themselves, but it’s the opposing teaching styles that get in the way of peace among everybody. And then you re-introduce Johnny’s former sensei John Kreese, who taught him all of the negative things he has been trying to step away from, and it’s a recipe for chaos. The kids have their own drama happening, with alliances always flipping and typical high school drama coming into play.

Cobra Kai is not a perfect show, but it works despite its flaws. At times it gets a bit overdramatic, and you realize what you are watching is completely ridiculous, but that is part of the charm. Instead of shying away from the insanity, it leans into it and knows exactly what it is, and this season is no different. The action sequences are really well done with outstanding choreography and fierce intensity. Everything just feels right, and I can’t wait to see what’s in store for season four.